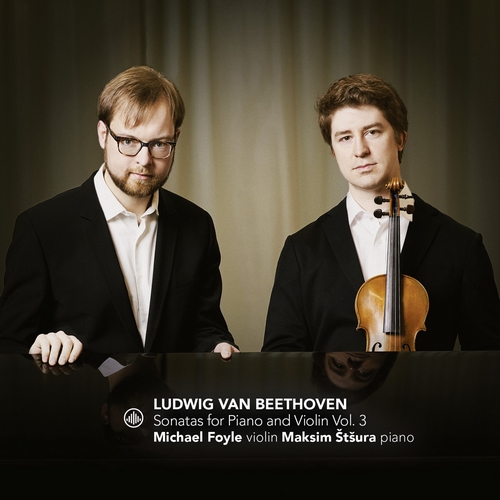 Sonata No. 9 in A Major, Op. 47
Sonata No. 10 in G Major, Op. 96
The sonatas on the first two discs were emblematic of Beethoven’s early and middle periods, showcasing the composer’s command of the Classical idiom. The last two sonatas push the boundaries of the genre even further, resulting in artistic efforts of increased emotional intensity, cyclical scope, and lyrical intimacy. They are also considered among the most dramatic and challenging works in the duo repertoire.

An early review of Sonata no. 9 in the Allgemeine musikalische Zeitung was rude: ‘The addition to the title ‘scritta in uno stile molto concertante, quasi come d’un concerto’ appears eccentric, presumptuous and ostentatious’. However, to modern audiences this ‘like a concerto’ element that describes the equality and democratic dialogue between the two instruments is now integral to our understanding of the notion of chamber music and in this, Beethoven was a trailblazer. According to the great violinist Carl Flesch, ‘a flower must blossom in the souls’ of those performing Beethoven’s Sonata for Piano and Violin in G major Op. 96. The work dates from 1812, a full decade after previous six sonatas, and in its sublime beauty and pathos represents the transformation in Beethoven’s later works from the heroic, defiant drama immortalised in works like the ‘Kreutzer’ to something far more searching and spiritual, rather akin to his late quartets.
Recorded at MotorMusic Studios, Belgium, 13-14 July 2020. Michael Foyle plays a Nicolo Amati violin.