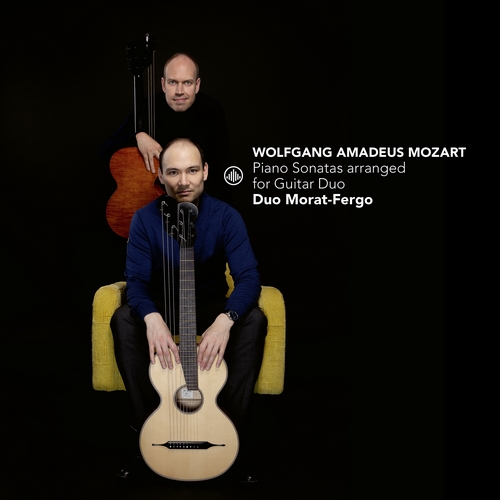 Sonata No. 10 in G Major orig. in C Major, KV 330
Sonata No. 5 in C Major orig. in G Major, KV 283
Sonata No. 4 in G Major orig. in E flat Major, KV 282
Sonata No. 11 in D Major orig. in A Major, KV 331
Although being technically very different instruments, we are convinced that the romantic guitar and the fortepiano share the same aesthetics. This was proven to us for the first time when we finally recorded our Schubert album ‘A Sentimental Moment’ in 2018, with piano works arranged for our Viennese guitars. After this, it was natural for us to turn to a composer who has fired more interest than anyone else: Mozart. We do hope that these arrangements of Mozart’s piano sonatas can suggest how he might have expressed his genius on our instrument. The shorter duration of the notes, as well as the delicacy and richness of colours found in the sound world of the guitar, are quite close to those of the late 18th Century fortepianos that Mozart would have known, while the dynamic range of the guitar would be very much at home in the salons and smaller concert venues of that time. Listening to the sonatas played on two guitars might be exotic, but the plucked sound fits in with the family of keyboard instruments.
Recorded at Abtei Marienmünster, Germany, 5-8 October 2020. The duo plays

copies of romantic Viennese guitars from the time of Schubert.