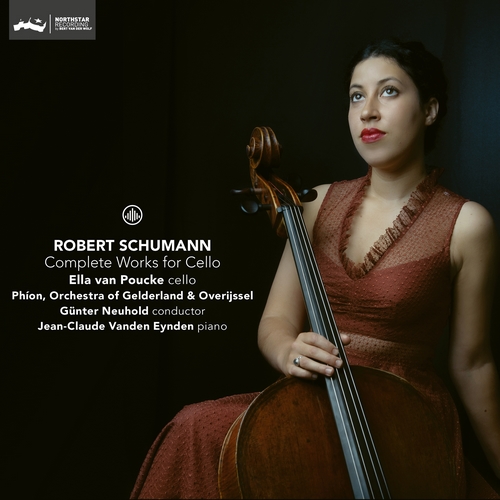 She is the first prize winner of the International Isang Yun cello competition 2015, the Leopoldinum Award 2015, Prix Nicolas Firmenich 2013, Elisabeth Everts Award 2014, Prix Academie Maurice Ravel 2012, Dutch Musician of the Year 2012, first prize winner of the 2008 Princess Christina Competition and recipient of the special prize in “recognition of an outstanding performance at the Grand Prix Emanuel Feuermann 2014.

Schumann composed his Cello Concerto in about two weeks during November 1850. Before Schumann, few major composers had written cello concertos. Schumann avoids technical display for its own sake, allowing his characteristic poetic expression, intimacy and fantasy to prevail.

Schumann originally scored the Fantasiestücke Opus 73 (1849) for clarinet and piano but simultaneously provided alternative arrangements for violin or cello. In his choice of clarinet Schumann was typically innovative. The three pieces are melodically interrelated, creating a unity underlined by the absence of breaks between them.

Schumann's Adagio and Allegro in A flat major, Opus 70 dates from a week after the Fantasiestucke Opus 73. He originally intended his Opus 70 for the new valve horn, though he named cello, violin or viola as alternative instruments. The piece is fully characteristic of Schumann's Romantic spirit. The expansive and dreamily romantic Adagio gives way to an Allegro with a leaping, joyful main theme.