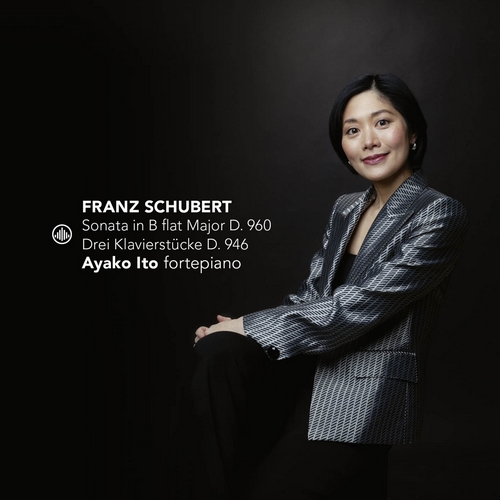 Sonata in B flat Major, D. 960
Drei Klavierstücke, D. 946
Ayako Ito: Nowadays, in concert halls, we generally see a single type of piano that normally has 88 keys and is normally black. Things were quite different in the Vienna of the 19th century: the piano had fewer keys, was decorated with wooden inlay and had no steel subframe. All this made them sound quite different.

Conrad Graf was one of the finest builders of pianofortes in Vienna in the period from 1820-40. And Franz Schubert was living in the same city. We can revive a rich, warm, singing, powerful and even orchestral sound on Graf's pianofortes. His pianos feature the Viennese action or “Prellzungenmechanik”, with their hammers built up from many layers of leather. These hammers allow the performer to impart subtle nuances and dynamic contrasts. Of course, the pianos are straight-strung. The player can alter the tonal colour using four pedals, with one of the pedals specific to the pianoforte being the moderator. When the moderator pedal is depressed, a strip of cashmere slips between the hammers and the strings.

Christopher Clarke (1947) built the instrument used for this recording in 2000, as a facsimile of Conrad Graf's pianoforte no. 995. Clarke's pianoforte always inspires me. I find it a miraculous instrument. The utter precision of the mechanism lets us explore the finest gradations and introduce the most subtle nuances – singing, speaking or whispering. It is a mechanism that demands a high technical mastery from the player.
Recorded at De Academiezaal, Sint-Truiden, Belgium, 28-30 October 2019. Fortepiano: Viennese fortepiano, Christopher Clarke, Cluny, France, 2000. Facsimile after Conrad Graf, Vienna, Opus 995, 1826.