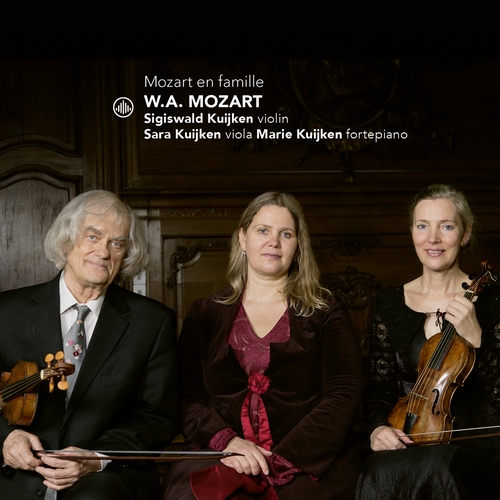 Sonata in C Major, KV. 296 for fortepiano and violin
Duo in G Major, KV. 423 for violin and viola
Fantasie in D Minor, KV. 397 for fortepiano
“Kegelstatt” Trio, KV. 498 in E flat Major (Artaria original edition for violin, viola and piano, 1788)
This recording of Mozart chamber music can be listened to as a pleasant private concert "en famille". The choice of the works is dictated solely by the specific instruments played by the three family members: violin, viola and keyboard. This is not a usual instrumentation in the chamber music repertoire, yet it is this combination that has given rise to a pleasantly varied programme - thanks to Mozart's inexhaustible genius!

The sonata in C major (KV 296) is dated Mannheim, 11 March 1778. Mozart had left Salzburg with his mother in September 1777 to try his luck in Paris, but musical and amorous reasons caused him to spend five months in the musical city of Mannheim before he continued his journey to Paris.

Mozart wrote the two duos for violin and viola (KV 423 and 424) in 1783, when he was in Salzburg for a few weeks. In the first of the two duets (KV 423, in G major, recorded here), it is immediately obvious how both instruments are treated equally: both parts are extremely concertante, the dialogue is very intense. We also realise how well Mozart (who himself was an accomplished violin virtuoso, and also enjoyed playing the viola) understood and exploited the possibilities and the separate characters of the violin and the viola from within…

The Fantasy in D minor for fortepiano (KV 397) is a rare gem in the keyboard literature - the composition date is estimated to be around 1782. Mozart is without doubt among all composers the one who has the most intimate relationship with the d minor mystery - think for example of his String Quartet in d minor (KV 421), his Piano Concerto KV 466, and of course his Requiem (KV 626) - in all these works the d minor key stands for a deep, dark but not depressing energy. It is as if Mozart wants us to feel and see how fatality is inevitably part of the unspeakable mystery of life and suffering... But at the same time he testifies how strong the deeply hidden positive forces continue to propel everything, eternally and indestructibly. Here, Mozart reaches into the deepest abysses…

The so-called Kegelstatt Trio (KV 498, dated 5th of August, 1786) was originally intended for clarinet, viola and keyboard. In the printed edition of this trio, Mozart had the clarinet part replaced by a violin part, and mentioned the original clarinet part as an alternative to the violin - surely this would have boosted sales... This recording presents the printed version of this work (with violin in stead of clarinet), in which the lower notes of the clarinet part have been very judiciously shifted to higher regions, within the violin range…

The key of E-flat major is a constant reminder of Mozart's Masonic affiliation. Wolfgang received great material support on several occasions from lodge brothers, and perhaps the Kegelstatt-story is referring to joint recreation among like-minded friends... The keyboard instrument played for this recording is a faithful copy (by Chris Maene, Ruiselede-Belgium) of a fortepiano built ca 1785 by Johann Andreas Stein in Augsburg. Mozart was a great friend of this instrument builder. The size of J.A.Stein's fortepianos is basically comparable with the harpsichords of his time.
Recorded at H.Hart Zorggroep, Kortrijk, Belgium, 23 - 25 November 2021. Piano: Chris Maene (Ruiselede, Belgium) - copy after Johann Andreas Stein, Augsburg ca. 1785.