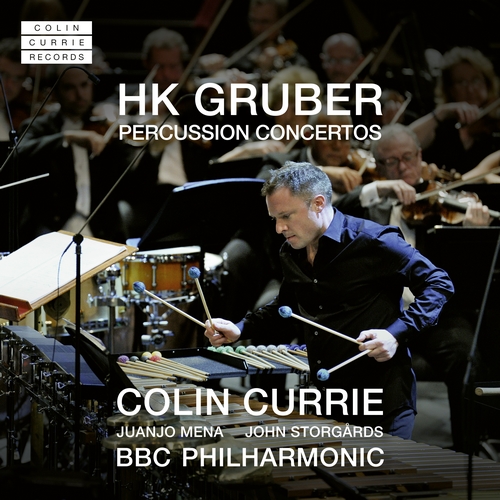 Rough Music
into the open…
Colin Currie presents the first concerto album on his own label, a pairing of works by the innovative composer, conductor and chansonnier HK Gruber.

“To write one masterpiece for solo percussion and orchestra may be regarded as an adventure; to write two combines for a colossus. Such is the case for the dual works on this recording, which span the full creative freedom, magic, daring and brilliance of Mr HK Gruber, or ‘Nali’ to those who know him. I would fall under his spell certainly in October 2001 in Leipzig, when we first worked together, but just as likely back in July 1999 when I attended the world premiere of his trumpet concerto Aerial at the BBC Proms, written for our magnificent mutual friend, Hakan Hardenberger. In either event, a scene was being set, longer term, for my very own ‘Nali World Premiere’ at the Royal Albert Hall, in July 2015 – the performance of into the open... presented here.

If that work encapsulates the very latest in contemporary percussion endeavour, Rough Music (1982-83), for all its swagger, is an early example of a percussion concerto. For the composer, antecedents were few, with concertos by André Jolivet and Darius Milhaud (a work composed in 1929-30!) named as scant examples of the existing repertoire. A graduate of the Vienna Boys Choir, Nali was at that time seated on the Co-Principal Double Bass chair of the Vienna Radio Symphony Orchestra, and his Principal Timpanist colleague, Gerald Fromme, asked him about the possibility of a concerto. The work that was born of this friendship and collaboration would be an astounding, brazenly ambitious paradigm shift for the repertory, with the taught technical expertise of the composition combining with that audacious and limitless musical scope, featuring genuine daredevil heroics from a fully emancipated soloist.”