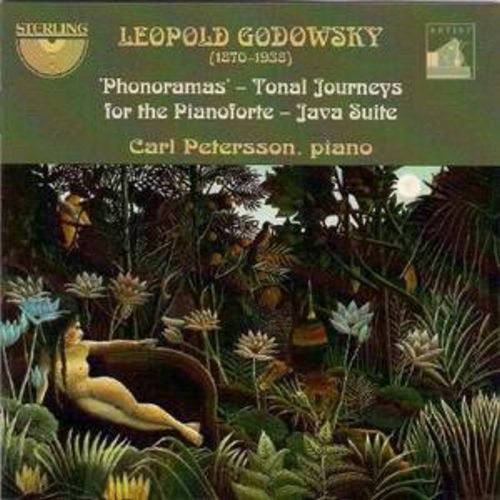 Sterling - CDA 1671-2
Kompozytor
Leopold Godowski (1870-1938)
Camille Saint-Saens (1835-1921)
Wykonawcy
Carl Petersson, piano
Godowsky:
Phonoramas I
Phonoramas II
Phonoramas III
Phonoramas IV
Saint-Saens:
Dance Macabre (arr. Liszt/Horowitz)
For the genesis of Java Suite we have to go back to 1920. Godowsky was 50, at the height of his fame as a pianiast and a composer, and about to enter the most hectic decade of his life. He had recently made New York his base, he was married with four children and his hands were insured for one million dollars. The Nerw York Times has dubbed him 'a pianist for pianists' as Shelly is 'a poet for poets'. After a two year tour to exotic places such as Mexico, Japan, Hong Hong, Shanghai, Singapore and Java he started composing the first of his Phonoramas and naming them Java Suite.