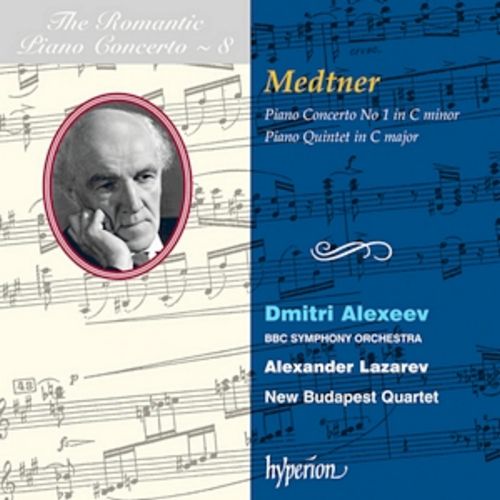 Piano Concerto No 1 In C Minor
Piano Quintet
When one considers the life of Nikolai Karlovich Medtner it is impossible not to be amazed by his strange, tragic and yet marvellous destiny. He was recognized in Russia at the beginning of the twentieth century as one of the most important composers and was, with Scriabin and Rachmaninov, an extremely influential, almost ‘cult’ figure for a whole generation of the Russian intellectual élite. He was also a great pianist and an outstanding musical thinker. His personality was completely divorced from everyday life, but the depth and power of his intellect, entirely absorbed in music, philosophy and the history of culture, were deeply respected by such contemporaries as Nikisch, Rachmaninov, Furtwängler, Koussevitsky, Glazunov and Prokofiev. There is thus something of a paradox in the fact that for the last thirty years of his life, when he lived in the West, he remained practically unknown to the general public and spent most of his life in abject poverty.

His music is the subject of a similar paradox. More than half a century of composing saw his style change remarkably little; critical reaction, however, differed wildly. Some thought of him as an innovator where others considered him an arch-conservative. Some felt he was the heir to the great Germanic tradition, while others spoke of his Russian soul and his ability to capture in his music the atmosphere of Russia at the turn of the century. It would seem, then, that neither the composer’s personality nor his musical style can be analysed within the limits of a single tradition, be this even the rich tradition of a Russia or Germany. This ambivalence stems from Medtner’s own origins. Since Peter the Great had, in the words of Pushkin, ‘opened a window into Europe’, thousands of foreigners had been living in Russia. This strange community, which juxtaposed European roots with the changing environment of Russia, formed a unique part of Russian life and produced many remarkable figures men of art, science and politics.

Medtner’s ancestors probably left Germany in the eighteenth century, and he was born in Moscow. Both his personality and his music evince a combination of Germanic tendency to weighty philosophizing and typically Moscovite spirit. The beginning of Medtner’s artistic activity came at a time which many consider to have been one of the high points in the history of Russian culture. This era is known as the Silver Age, or the Russian Renaissance. At the turn of the century the arts, music and philosophy were flourishing in Russia; the revolution of 1917 brought this unique period to an end. Like Scriabin and Rachmaninov, Medtner expressed the raw nerve of this momentous time: his contemporaries noted the ‘psychologically intense, demonic’ character of his music. Yet the composer used the ‘eternal laws of music’ alongside these more elusive, transient and indefinable principles. Much later, in 1930, in his book Muse and Mode he analysed with scientific precision the basic elements of the language of music (melody, harmony, rhythm), interpreting them in the spirit of the classical tradition of the nineteenth century and repudiating the whole development of modern music. Thus Medtner’s music is not easy to understand because of its complicated combination of entirely different elements: the fusion of German roots and Russian spirit, the quest for new musical expression and dedicated conservatism, a rare intelligence and almost childlike naivety.

What was the genesis of Medtner’s style? He considered himself a follower of Beethoven and the best of his work reflects the great polyphonic skill, the detailed development of short compact motifs, and the severe spirit and concentrated depth of the late Beethoven sonatas. No less important for Medtner was German Romanticism in general and Schumann’s legacy in particular. Goethe (with whom Medtner’s great-grandfather was acquainted) was a permanent source of inspiration for him. Medtner was often compared with Brahms and there are indeed comparisons to be made: the deep seriousness of his music, some of the special harmonic features, the interest in intricate cross-rhythms, and piano-writing. Nevertheless, it would be a great mistake to consider him neo-Brahmsian. Medtner never imitated anybody and was, moreover, not noted for his interest in Brahms’s music. The similarities are rather the result of their independent development of the commonly inherited Romantic tradition.

Comparison of Medtner and Rachmaninov is more justifiable. They were great friends for most of their lives and they influenced each other in many ways. Medtner was enchanted by the beauty of Rachmaninov’s melodies and Rachmaninov was highly impressed by Medtner’s quest for new harmonies and rhythms. It is significant that Rachmaninov dedicated to Medtner his Fourth Piano Concerto, the most explicit instance of this mutual inspiration.

The best of Medtner’s music represents something very special, and it is unmistakable: the melodies and harmonies are inimitable in the way they are drawn from the piano, an instrument cherished by Medtner as much as by Chopin. Today, forty years after Medtner’s death, we see that the heroic, self-sacrificing work to which he devoted his whole life was not in vain. His music, imbued with the strength of his powerful spirit and the beauty he believed in, is discovering a new life.

Of the three Medtner piano concertos the first is remarkable for its inspirational inner content, the beauty of its melodies and the grand scale of its structure. It is probably his most outstanding work. He began it in 1914 and the first performance took place in Moscow on 12 May 1918, the composer as soloist under Koussevitsky.

The horrible events of the First World War are, perhaps unavoidably, reflected in the work. Russian and German cultures meant equally much to Medtner and the war between the two countries developed into a personal tragedy for him. The Concerto is a grandiose, one-movement construction, written in sonata form, where the extended development of each section compensates for the lack of the traditional division into movements. Slow and scherzo-like episodes sound almost like the middle movement of a symphony and the coda, which is thematically and dynamically rich, serves as a finale. The originality of the Concerto’s form is increased by the interfusion of two structural principles: the sonata form gives the work its general contours while the variation form imparts diversity, contrast and a more fragmentary structure.

The work opens with four introductory exclamations anticipating the appearance of the main theme, full of heroic yet tragic pathos. The thematic concentration of the Concerto’s musical material is remarkable: the main theme serves as the source for the two lyrical subjects, as well as for every other important section. The development is very unusual: it consists of a theme and a cycle of variations. Here the composer develops fragments of all the main themes of the Concerto with considerable polyphonic skill. The short recapitulation is extremely dynamic, and the coda presents the last climax of the Concerto. Medtner somewhat delays the outcome by leading the themes through a number of odd modulations and unusual harmonies: only at the very end do we hear a triumphant hymn in C major, followed by three final bell-like ringing strokes on the piano.

The Piano Quintet has a very special place among Medtner’s works. The composer himself regarded it as the synthesis or summary of all his work and, indeed, worked on it throughout his life. The first sketches date back to 1903/4 and it was only completed in 1949. This work, which was destined to be his last, combines freshness of inspiration with great mastery of composition.

Again, the structure of the Quintet is unusual. The first movement expresses what can only be described as a theme of Hope and Faith. It opens with a large introduction in which the epic theme flows broadly and solemnly. The new subject in the central section reminds one of the famous medieval tune Dies irae. The next and final part, the Maestoso, is essential to the whole being of the Quintet: here the composer introduces a motif which has deep autobiographical meaning. It is written as if to the words of the Gospel passage ‘Blessed are you who are hungry now; you will have your fill. Blessed are you who weep now; you will laugh for joy’. A coda combines the two themes ‘Dies irae’ and ‘Blessed’ in a manner reminiscent of bells.

The melody of the second movement is as beautiful and tragic as the words of the Psalm to which it was written (‘For your name’s sake, O Lord, you will pardon my guilt, great as it is’, and ‘Look toward me and have pity on me, for I am alone and afflicted’) and is deeply rooted in the ancient music of the Russian Orthodox Church. Gradually, the musical material in which fragments of the first movement can once more be heard flows into the ‘Blessed’ leitmotif, now sharply harmonized and distorted.

The Finale, following attacca, is the synthesis which sums up elements of the whole work; it lasts as long as the first two movements together, and is written in extremely complicated sonata form. The main conflict can be seen in the contrasts not only between the first and second subjects, but also between the exposition and development sections, which turn into a battlefield of multiple polyphonic combinations. The coda revives the second theme which the composer himself called ‘the Hymn’: this is an amazingly simple melody, full of light and rejoicing.

'Once again Hyperion hold the day. Strongly recommended ... for a first-rate performance of one of the finest of all late-Romantic concertos ever composed, and for a fresh look at a chamber-music masterpiece' (CDReview)

'Brilliantly enterprising ... certainly one of the finest in Hyperion's Romantic Concerto series' (Gramophone)