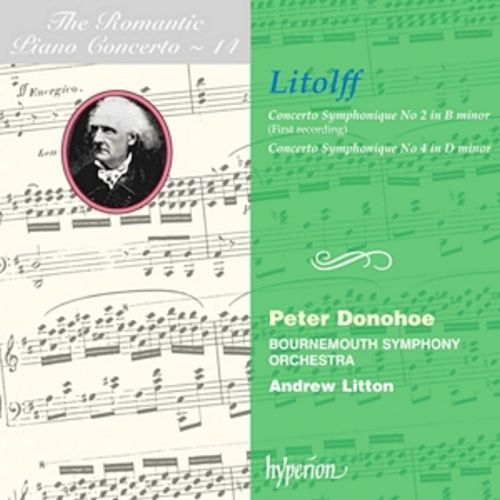 Concerto Symphonique No 2 I No 4
The Scherzo from Litolff's Fourth Concerto has long been a Classical lollipop; now find out what the rest sounds like …

Litolff was one of the great virtuosi of the nineteenth century. His five Concertos Symphoniques (the first of which is now unfortunately lost) were of major influence in the transition from the Classically-derived concertos of Hummel, Moscheles and Chopin to the more symphonic late-Romantic concertos. He pioneered the use of a four-movement structure which included a Scherzo (as in Brahms's Second Concerto) and gave the orchestra much more of the thematic material. Indeed, although the piano writing is very brilliant, much of it is accompanimental. The Second Concerto is a real rarity, the orchestral parts proving very hard to locate. This is probably its first performance in over 130 years.

'Magical playing … the music is irresistibly melodious, inventive and dazzlingly virtuosic. Donohoe throws off the technical pyrotechnics with insouciance. A fine recording only enhances the joys of this entertaining music and Donohoe's exhilarating performance' (The Sunday Times)

'Donohoe and Litton rise to the occasion magnificently with panache and poetry in equal measure … for the fourteenth time in this historically important series of recordings we can raise our hats and say "Thank you, Hyperion"' (Classic CD)