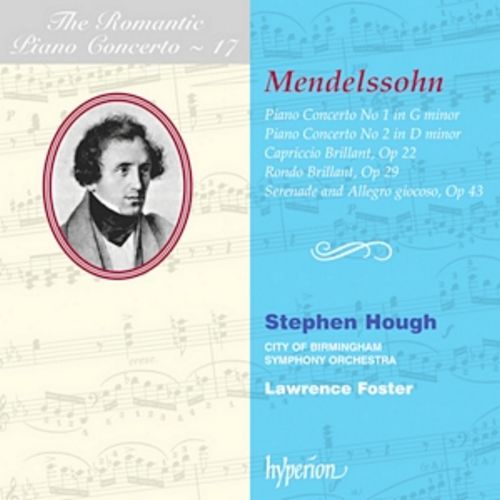 Piano Concerto No1 I No 2
Capriccio Brillant In B
This disc brings together, for the first time to our knowledge, all of Mendelssohn's published works for piano and orchestra. Mendelssohn was regarded as one of the foremost pianists of his day, Clara Schumann describing him as 'the dearest pianist of all'. While his works for the instrument are by no means as numerous as those of, say, Liszt or Chopin, they are models of the nineteenth-century genre and filled with melodious charm.

The First Concerto is actually the earliest work on this disc, despite its opus number, and is the work that Liszt sight-read from a scribbled score to an astonished Mendelssohn when the two composers met in Paris. The Second Concerto saw its premiere appropriately enough given the orchestra performing on this disc in Birmingham during the festival of 1837. The remaining three works find Mendelssohn in light-hearted mood, showing off his knack for melody and unaffected charm to the full.

'The soft, stylish arpeggios that open the first work on the disc announce immediately that something special is on the way. Hough is now clearly first recommendation in the concertos' (Gramophone)

'You can tell this is special from the first chord ... I don't think [Stephen Hough] has an equal on record in this music, even with competitors like Andras Schiff and Murray Perahia. Issues like this add to the feeling that the great Mendelssohn reappraisal is underway at last. It's long overdue' (The Independent)

'Once again we have Stephen Hough lavishing his exciting gifts upon a splendid Mendelssohn programme. I cannot envisage this splendidly recorded disc being absent from the year's honours list' (Classic CD)

'Biting intensity, yet with freer expressiveness and bigger contrasts he also brings out extra poetry and … a sparkling wit ... A constant delight' (The Guardian)

'An impressive achievement all round' (Piano International)

'[Hough] can scamper with the best and is able to incorporate delightful capriciousness without derailing the flow of thought ... These performances…boast of nearly ideal lightness, vivacity and impetus' (BBC Music Magazine)

'Hough’s pianism …is elegant, spirited and poetic, and well-attuned, too, to the swirling skittishness of the concertos' finales ... Hough’s reading, as throughout this disc, is a joy' (Birmingham Post)

'Hough offers far greater elegance and plusher tone ... Hough is, as always, a delight to listen to, such as in his quicksilver scattering of thirds in the last movement of the Second Concerto' (Fanfare)

'It should perhaps come as no surprise that Stephen Hough should prove so perfectly attuned to these works … if you opt for just a single recording, this would make an excellent first choice' (Gramophone)

'Stephen Hough is, undoubtedly, one of the most elegant pianists before the public today … Hough does not fail to underscore this in the brilliant pyrotechnics' (Soundscapes)

'Stephen Hough is a player of formidable talent, capturing the essence and spirit of Mendelssohn’s driving enthusiasm and creative wonder' (Yorkshire Evening Post)