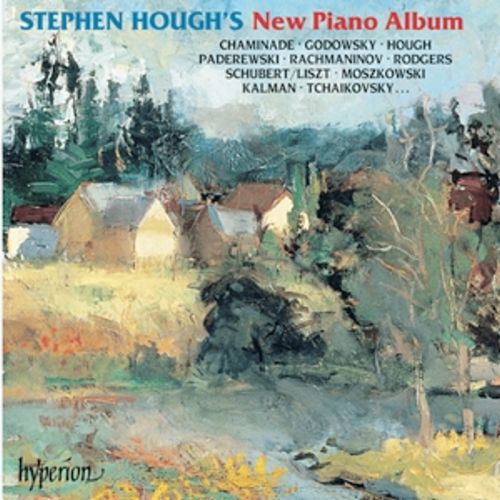 Back in the 80's Stephen Hough made two recordings for Virgin Classics which quickly became cult items among piano enthusiasts throughout the world. Using the title 'The Piano Album' those CD's featured a variety of the encore type pieces in which the pianist revels in the possibilities of his instrument, pieces designed to show off the performer as much as the music. Stephen Hough's New Piano Album revisits this territory with a new selection of gems. This is the music of the great pianists of the past, and many, Rachmaninov and Paderewski to name but two, not only played such pieces but also wrote them. While times and styles have sadly changed, those who have heard Stephen Hough in concert know that at encore time this tradition is alive and well in his hands and that amongst the jewels of the past it is equally likely there will be a new Hough transcription such as the Carousel waltz included here. This is a unique collection that will delight all fans of both Stephen Hough and romantic piano music.

'This is a terrific disc. A master pianist reminds us that the piano can delight, surprise and enchant' (Classic CD)

‘the pianist’s giddy romp through ‘The Carousel Waltz’ is a tour de force that brilliantly recaptures both the tender and tough ... The unadorned Rachmaninov and Tchaikovsky selections are played with heartfelt simplicity and a lean yet singing sonority … Delightful’ (Gramophone)

'Stephen Hough is probably the most Protean pianist of his generation. Not only is he equally adept in the intellectual challenges of the Schumann Fantasie and the delightfully brainless acrobatics of the Award-winning Scharwenka Fourth, but, beyond that, he can tease out the pleasures from the trifles featured here with an old-fashioned wit - and a refreshing lack of pretension - that few living performers can match. What's most striking, on first hearing, is the finesse of his fingers, in particular the kaleidoscopic range of his colour and touch. As you listen again, you're apt to be struck even more by Hough's emotional poise ... Excellent ... Like any first-class dessert-tray, this one is addictive.' (International Piano Quarterly)

'Few recording pianists can match Stephen Hough in the flair with which he tackles trivial party pieces like the 20 varied items here. He gives such encore material sparkle and point that charms the ear' (The Guardian)

‘His performances throughout this disc display his acute understanding of Romantic performance practice (finely judged tempo fluctuations and tasteful rubato), his breath ... taking digital dexterity, and adept control of piano tone, which ranges from intimate to heroic’ (CD Now)

‘Hough’s own glittering Musical Jewellery Box and his arrangement of Rodgers and Hammerstein’s Carousel Waltz are lovely nostalgia fodder ... In the hands of a pianist so refined and gentle this is an ideal fireside recital’ (Financial Times)

‘fingers of pliable steel and mind of infinite affection ... for he makes one mindful of legendary ... virtuosos whose astonishing manual dexterity was matched by spontaneous flights of fancy, making most of today’s keyboard stars sound slightly ham-fisted and emotionally constipated ... While one appreciates the impressive clarity of his every interpretive gesture, one also hears an intriguing amalgam of analytical mind and swooning heart’ (The Ottawa Citizen)

'As a perfect continuation of Stephen Hough’s two splendid forerunners (Piano Album), ... this New Piano Album displays great conviction and even greater charm, first because its judicious selection and arrangement takes the listener through a constantly changing sound world but also because of Stephen Hough’s brilliant playing. With this repertoire of unusual little piano pieces he firmly establishes himself as a worthy heir to the most famous pianists of the beginning of the twentieth century.' (Répertoire, France)