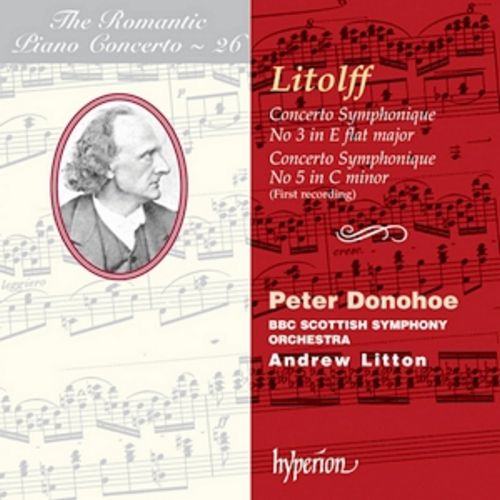 Concertos Symphoniques No 3 And No 5
This recording is the companion to Donohoe and Litton's earlier recording of Litolff's Concerto Symphoniques 2 & 4 (CDA66889) and completes our survey of the composer's works for piano and orchestra (Litolff's first concerto was never published and is lost). .Both works owe the 'Symphonique' title to their four-movement structure (all Litolff's concertos contain a Scherzo in addition to the three conventional movements), and the importance of the orchestra in their thematic development. The Third Concerto was (along with the Fourth) the most popular in Litolff's lifetime and was written for performance in the Netherlands. It uses two popular Dutch melodies which no doubt explains it early success. The Fifth Concerto is the most obscure of the four extant works yet it is the most ambitious in scale with a particularly imposing orchestral exposition. Unfortunately by the time the work was composed (1867) Litolff had faded from the public eye and the work received few, if any, performances. It's Scherzo, obviously modelled on the equivalent 'hit' piece from the Fourth Concerto, has the potential to be almost as popular, though it's virtuosic leaping octave passages are likely to deter all but the most muscular of pianists.

‘I found the first Litolff disc delightful, and this new release is just as captivating. Very warmly recommended’ (Fanfare, USA)

‘Few pianists of any nationality could approach, let alone top, Peter Donohoe’s blistering virtuosity in these works. This is an invaluable issue for lovers of intriguing repertoire and piano-playing of pulverising mastery’ (Gramophone)

'Peter Donohoe … is the ideal man for such music, while the BBCSSO under Andrew Litton offers razor-sharp support. A wonderfully clear recording' (BBC Music Magazine)

‘Donohoe’s pianism is ideally suited to this music, calling as it does for a brilliant, incisive tone, a dazzling leggiero touch and rhythmic punch … dash out and buy the disc forthwith’ (International Record Review)