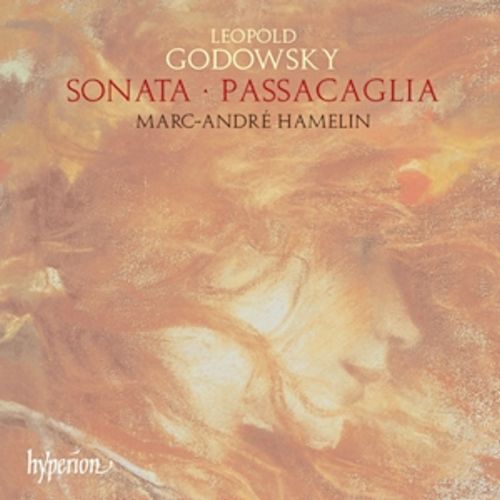 Piano Sonata in E minor
Passacaglia '44 variations, cadenza and fugue on the opening of Schubert's 'Unfinished' Symphony'
Famed for his piano miniatures and his fantastically elaborate transcriptions, Godowsky wrote only two large-scale original works for the piano. The huge five-movement Sonata (1910/11), one of the most imposing works of its type, is powerfully dramatic and, like most Godowsky, often very contrapuntal. It has a beautiful slow movement, a delightful scherzo, and a monumental 20-minute finale that includes a fugue on the name B-A-C-H. It deserves to be far better known. The Passacaglia was written in 1927 in anticipation of the 100th anniversary of Schubert's death, and is subtitled '44 variations, cadenza and fugue on the opening theme of Schubert's Unfinished Symphony'. The piece has earned a reputation as being among the most difficult in the repertoire, partly because of Horowitz's flippant comment that it required six hands to play it - it is in fact superbly pianistic. This is the first time that these two works have appeared on the same disc. Anyone who has heard Marc-André Hamelin's Gramphone Award-winning set of Godowsky's complete Studies after Chopin's Etudes will want this equally phenomenal follow-up. The performances are spectacular.

'Breathtakingly brilliant … Marc-André Hamelin proves not only that it’s possible, but that it’s definitely worth the effort. Revelatory’ (BBC Music Magazine)

'eloquent, pointed, and moving … A recommendation would be superfluous – this is one for the ages' (Fanfare, USA)

'Marc-André Hamelin has the phenomenal technique and razor-sharp musical intellect to succeed with this music where others usually fail … In Hamelin we have a pianist not only equal to the task, but enthusiastic about it … this is a recording every pinaophile should hear and hear again! … an astonishing achievement, imaginatively created and brilliantly realised – and beautifully recorded as well. What a bonus' (bbc.co.uk)

'Hamelin’s performance, as one might expect, is magnificent in every way, charged with intensity, colorful, clear, and richly detailed by means of the pianist’s consummate technique' (American Record Guide)

'Marc-André Hamelin easily copes, both musically and technically; no doubt Godowsky would have approved' (Pianist)