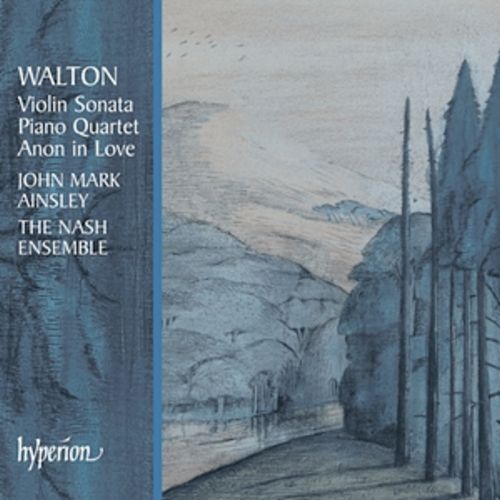 Hyperion continues to salute Walton's centenary year with a selection of his chamber music. This is a collection of intimate works providing many insights into the composer's life. The Piano Quartet, for example, is the first work in which Walton considered he had shown any talent as a composer, and the Valse from Façade illustrates his irreverence towards popular music of the day. Before Anon in Love, Walton had yet to write for the guitar. The work was commissioned by Peter Pears and Julian Bream who coached him about the instrument’s characteristics. The Passacaglia arose from a friendship with Mstislav Rostropovich, who challenged the composer to write something for him. Loosely based on Bach's works for solo cello, the work comprises a theme and ten variations and was premiered by Rostropovich at Walton's eightieth birthday celebrations. A chance meeting with Diana Gould, the then-fiancée of Yehudi Menuhin, resulted in the prompt commission of the Violin Sonata. It was to become infused with tragedy following the death of Walton's partner of fourteen years, Alice, Lady Wimbourne, during the work's composition. Walton's overwhelming sense of loss is much in evidence and it now stands as one of his finest achievements.

'this superb Hyperion disc will have great appeal both for the general collector and the Walton specialist' (musicweb.uk.net)