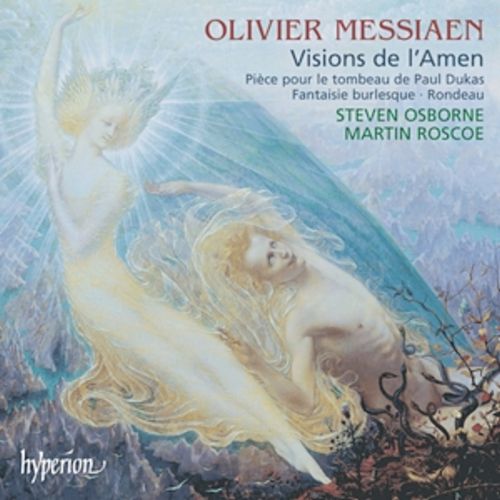 Steven Osborne has already made his name as an outstanding interpreter of Messiaen with his ecstatic recording of the Vingt Regards sur l’Enfant Jésus (Hyperion, CDA67351/2), which was described by Gramophone as ‘one of Hyperion’s finest piano recordings – quite an achievement in a catalogue of outstanding piano discs’. Here he is joined by Martin Roscoe in an equally revelatory account of Messiaen’s other great religious piano cycle, this time for two pianos, the Visions de l’Amen, composed a year before Vingt Regards in 1943. Their combination of emotional power, religious austerity, keyboard colour and dazzling pyrotechnics makes for an overwhelming and physically exhilarating experience. The listener is given an insight to what it must have been like to have heard the premiere of this work, played by Messiaen with his future wife, the immensly gifted 19-year-old Yvonne Loriod, to a strictly invited audience in Occupied Paris. Steven Osborne plays three solo pieces to complete the disc. The Rondeau was composed at the same time as Visions de l’Amen, but is much less musically (although no less technically) ambitious. The other two pieces were composed in the 1930s, one in a more light-hearted vein, the other a contribution to a memorial volume for Paul Dukas, who died in 1935.

'This performance gets the balance between the blistering, ecstatic intensity and the static moments of contemplation exactly right, presenting all the rhythmic and harmonic layers with perfect clarity, while Osborne's accounts of the three earlier solo pieces are a real bonus' (The Guardian)

'Roscoe's piano handles most of the thematic material and the piano's lower reaches; Osborne supplies the iridescent details. Clarity and rhythmic precision cannot be faulted' (The Times)

'These pianists have a marvellous accord in Messiaen's amazing, clangorous, rapturous, visionary jamboree. Only a pile-up of adjectives, to which should be added coruscating and addictively dithyrambic, could do justice' (The Sunday Times)

'There is much to savour in Osborne and Roscoe's performance, captured in typically superlative Hyperion sound' (BBC Music Magazine)

'the precision and muscular virtuosity of Osborne's and Roscoe's playing is exactly what breathes life into the explicitly 'visionary' character of the work … The performance is lucid in conception and illuminating in its realization. Never laboured, it's marked throughout by a sense of ease, as well as by a sure sense of structure, of rhythmic detail, and of the diverse function and significance of each of the many layers in its complex 'mix'' (International Record Review)

'The playing of these two wonderful pianists is flawlessly gauged and concentrated, with Osborne's high-speed, lucid playing in the finale, as it shifts into overdrive in its final section, out of this world' (The Herald)