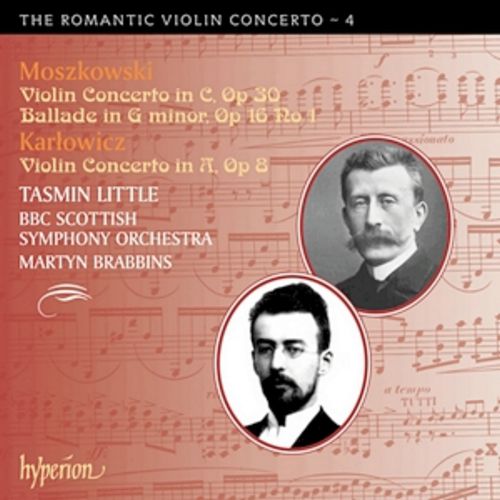 Hyperion’s Record of the Month for April is the fourth volume in the burgeoning ‘Romantic Violin Concerto’ series. The central work on the disc is Moritz Moszkowski’s C major Violin Concerto, a full-blooded Romantic work which demands exceptional virtuosity. An increasing number of recordings, many on the Hyperion label, of this composer’s music have done much to lift his reputation beyond that of the ‘trifling miniaturist’, and the Ballade in G minor amply demonstrates how even a small canvas can aspire to advanced heights of pyrotechnic wizardry. How much better known might Mieczysl/aw Karl/owicz have become had he not been struck down in his prime by an avalanche. What works do survive place Karl/owicz firmly alongside the ‘progressive neo-Romantics’ – with Wagner and Richard Strauss at their head – and his reputation today is largely based on a set of six symphonic poems composed in the last few years of his life. The Violin Concerto dates from the same period. Karl/owicz places considerable demands on the soloist as he exploits the instrument’s full potential but, as with Moszkowski’s Concerto, the required virtuosity never seems superfluous. Martyn Brabbins again leads the BBC Scottish Symphony Orchestra, this time in support of Tasmin Little, whose twenty or so recordings and innumerable worldwide concert appearances have won for her an enviable reputation as one of today’s leading violinists. This is her first recording for Hyperion.

'One of my discs of the year' (Classic FM Magazine)

'Tasmin Little displays an invitingly warm, slender tone and broad dynamic range, very much in keeping with the style of this music. Her intonation and bowing are impeccable: the considerable difficulties of Moszkowski's finale hold no terrors for her' (Fanfare, USA)

'Tasmin Little's idiomatic advocacy of all three works belies the fact that none could be described as standard repertoire ... Handsomely produced and well recorded, this issue makes three very welcome additions to the repertoire' (BBC Music Magazine)

'This disc is the most impressive installment in Hyperion's Romantic Concerto Series; superb and most beautifully recorded and played' (musicweb)