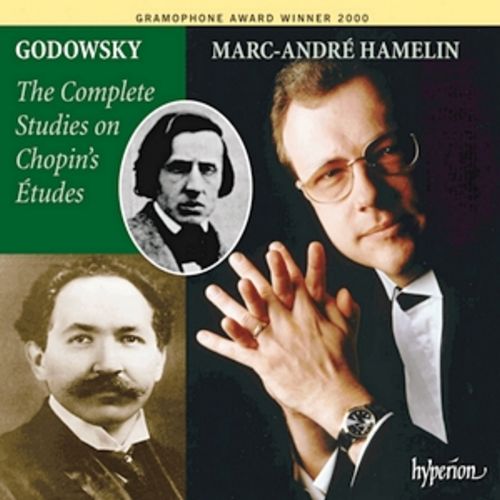 Godowsky's Studies on Chopin's Etudes have achieved a legendary status among piano enthusiasts. Few areas of the repertoire have such a notorious reputation for technical difficulty and audacious compositional invention. Far from being disrespectful maltreatments of Chopin's masterpieces, Godowsky's elaborations aim to extend the limits of modern piano technique. Some recast Chopin's right-hand passagework for the left hand while introducing new contrapuntal ideas; some treat the originals more freely, inverting, imitating or combining two Etudes; others are character pieces or variations based on Chopin's originals; and twenty-two of the Studies are for the left hand alone. Taken as a whole, these Studies revolutionized piano writing and expanded the polyphonic and polyrhythmic capabilities of the instrument. They remain among the most daunting challenges of the piano literature, their difficulties not always fully apparent to the listener. Pianists brave enough to tackle this music have often been content merely to get through the notes. Marc-André Hamelin, renowned for his superhuman technical control, injects them with the required range of character, colour and musicianship, as well as breathtaking virtuosity. Uniquely available on 2CDs, this will surely be the benchmark recording for all time. This set comes with a handsome booklet, including an essay by the Godowsky expert Jeremy Nicholas and individual commentaries by Marc-André Hamelin.

'A huge achievement ... and not only technically but musically as well. Hamelin delivers on every level: this recording had me gasping in disbelief, and then laughing out loud at the sheer audacity of it all - you really shouldn't miss them' (BBC CD Review)

'In Hamelin's hands more than any other these studies are no mere freak show, but make a genuine bid for repertoire status. Yet who else among pianists could rise to the challenge? And who else could do so with such consummate artistry? The Hyperion team has provided fabulous recording quality, commensurate with Hamelin's fabulous playing ... a sensational issue' (International Record Review)

'A celebration of what is possible on the pianoforte ... sensational' (Hi-Fi News & Record Review)

'This is the one we've looked for ... With this set we're hearing, reliably and for the first time throughout, not the notes but the music – the whimsy, the grandeur, the levitating delirium, coruscating polyphony, eerie and airily populated aural mirages as the familiar Chopin materials provide the merest thread of piquant divagations winged by the sheer lilt lifting into ever more beguilingly alluring fantastications. The effect is like one's first encounter with Milton's earthly paradise. Obviously, Hamelin was born to make Godowsky live for us. First-rate production complements one of the great recordings of the century – and I do mean the 20th century with its whelming backlog of palpable genius. Stupendous! Ne plus ultra' (Fanfare, USA)

'Rarely can such a gargantuan task – truly a labour of Hercules – have been accomplished with such strength, grace and agility, with an ease bordering on nonchalance. It is impossible to think of another living pianist who could have carried off this enterprise with comparable success. Hamelin crowns his already awe-inspiring discography with a truly phenomenal achievement' (Gramophone)

'Extraordinary performances. Few pianists, surely, can have executed and delivered these studies with such unnerving ease and panache (for example, try No 43 in C sharp minor – for left-hand alone!). A staggering feat of virtuosity' (Gramophone)

'Awe-inspiring … these are performances of such power, dexterity and finesse, that it is difficult to imagine them being surpassed' (Gramophone)

'This small, green box contains the pianophile's ultimate heaven ... This recording redoubles Hamelin's growing status as today's complete pianist, equal to anything that Godowsky cares to throw at him. Yet perhaps his greatest achievement is that this recording leaves the listener marvelling not only at Hamelin's incomparable pianism, but above all at the wizardry of the music itself' (BBC Music Magazine)

'This is probably the most breathtaking piano recording I’ve ever heard. It’s exceptional, not only for Hamelin’s pianistic perfection – staggering in itself – but also for the sensitivity and tenderness he brings to the music. This disc is a real winner' (BBC Music Magazine)

'I have no hesitation in saying that this is one of the great piano recordings of recent years and, if there's any justice at all, it will garner a whole chest-full of awards ... breathtaking'(Classic CD)

'This is one of the great solo piano recordings of this or any other year … unlikely ever to be surpassed. The Canadian virtuoso has one of the most astonishing keyboard techniques in history' (International Record Review)

'He has surpassed himself here: I have never heard such playing before. This is, quite simply, amazing' (International Piano Quarterly)

'Must rate as one of the great piano recordings; a stupendous achievement in terms of technique, musicianship and stamina' (Classic FM Magazine, Record of the Month)

'Hamelin’s award-winning release … has knocked us all sideways. Technically impeccable but artistically sensitive' (Time Out)