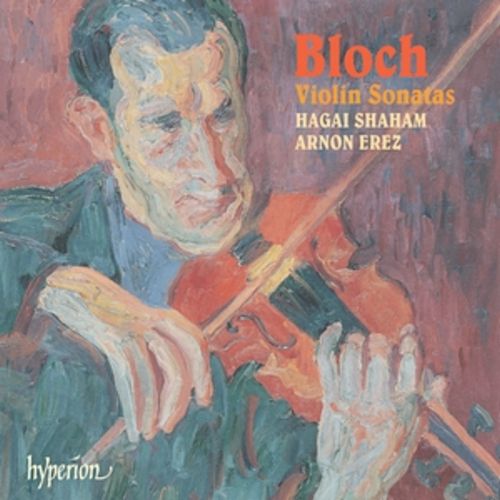 Hagai Shaham has already demonstrated his thrilling virtuosity and luscious tone in his Hyperion recordings of Jeno” Hubay, and here he shines in the richly expressive music of Ernest Bloch. The two violin sonatas are contrasting works (Bloch described No 1 as embodying ‘the world as it is’, while No 2 represents ‘the world as it should be’): the first is in three movements and balances violent and ritualistic motifs with passages of dream-like calm; the second is more simple and lyrical, characterized by long melodic lines and stylistically not unlike Szymanowski. The three shorter works are also lyrical and, like most of Bloch’s music, exemplify the Jewish influence on Bloch’s musical idiom. Lovers of the violin and early twentieth-century Romanticism will revel in ravishing music performed with such an irresistible zeal and flair. This is the first of two discs which will encompass Bloch’s complete music for violin and piano.

'With fine engineering, realistically balanced, and excellent annotation, this is a digital front-runner' (Gramophone)

'Played with lean intensity and dead-centre intonation reminiscent of the young Heifetz, these neglected works come fizzing off the page to mesmerising effect' (Classic FM Magazine)

'Shaham impresses in all aspects of these sonatas. His manner is fiery, his tone is full-bodied from a top of great purity to a bottom deep and resonant, and he tosses off the virtuoso passages with aplomb. Erez is a full partner, sometimes coming close to usurping the lead, which can be all to the good here. He roams the keyboard with assurance, playing with crisp exactitude and full-bodied tone' (Classicstoday.com)

'In both works, Shaham meets Bloch's extreme technical demands without flinching; and his timbral control is dazzling throughout (his ability to spin silk at the top of his register is especially astonishing). Pianist Arnon Erez seconds him admirably, whether the score demands that he engage in intricate give-and-take with the violinist or that he slip off into a different world entirely' (International Record Review)

'It's a credit to Shaham and accompanist Arnon Erez that this work carries such a punch. Bloch's knowledge of the violin - he was taught by a master in Ysaye - means that the passagework is frequently taxing, but with this completely under his fingers Shaham has no worry' (www.musicOMH.com)

'Hagai Shaham…(compared to Isaac Stern's recording of the first sonata) plays with similar intensity if not with equally ecstatic frenzy … Hagai Shaham, who has championed the music of violinist-composers Joseph Achron and, more recently, Jenö Hubay, produces a steely rather than a sumptuous tone. His grandiloquent oratorical flourishes, as well as his edgy technical display, therefore flash like tempered steel, however, leaving the least trace of coldness … So another disc or so from Shaham could encompass everything Bloch wrote for the violin (and perhaps even include the concerto). Given the strong appeal of this initial offering, that's a consummation devoutly to be wished. Highly recommended' (Fanfare Magazine)

'Bloch's first Sonata given a 'devastating performance' … If there is any justice, this fine new recording will win these undervalued works new friends. Please try these sonatas, whether or not you already know them' (BBC Radio 3 CD Review)

'Hagai Shaham confirms a remarkable talent, which goes far beyond the technical performance … This disc is essential at the head of a rather thin but high level catalogue [of this repertoire]' (Diapason)

'Here Shaham and Erez play with wonderful empathy and understanding, undoubtedly this is music that they feel with a deep passion. The aching Molto quieto is also very beautiful whilst the concluding Moderato really kicks off a whirlwind of activity that has Shaham on true top form…this whole disc is a definite must for lovers of solo violin especially those with a penchant for Bloch's unique music' (Classical Net.com)

'Bloch of emotions: vehemence and serenity, stud and certainty, poetry, brutality, sensuality, spirituality: the interpretation which is delivered to us by Hagai Shaham and Arnon Erez is of an incredible richness … But it is especially the interpretation of the five works which confers all its richness. There Hagai Shaham signs one of the most beautiful versions of these partitions: all is translated in a way subtle and inspired by a bow of an absolute control, a sumptuous sonority and a vibrato of an infinite diversity… in this album, Hagai Shaham and Arnon Erez, which one will never say enough the virtues of executants and especially of interpreters, reach the level of excellence' (Classica, Spain)