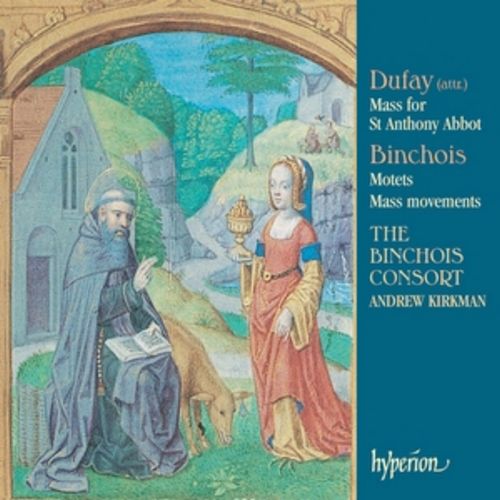 The Binchois Consort and Andrew Kirkman are now recognized as being the foremost interpreters of music by the father of polyphony that is Guillaume Dufay; their recordings of the Missa Puisque je vis and of Music for St Anthony of Padua were warmly received around the world, while the programme Music for St James the Greater won a Gramophone award. This new disc addresses the second of Dufay’s ‘Anthony’ Masses, the one in honour of St Anthony Abbott. This is thought to be the long-lost, and long-sought, work known to have been bequeathed by Dufay to the great cathedral at Cambrai, always his spiritual home however far afield his astonishing international career took him. Alongside Dufay’s masterpiece this disc offers three Mass movements and two motets by Dufay’s great contemporary Gilles Binchois. Primarily known as a composers of secular songs, Binchois’ large corpus of sacred music is gradually being unearthed – and meeting with the approbation it surely deserves. The eponymous composer would surely be grateful for these new performances.

'these singers are superbly experienced in this kind of repertoire, and they thrill us with the supple lines of the Alleluia, the vigour of the Credo and the swirling counterpoint of the Sanctus … These singers are at their best, though, in the Binchois Agnus - sustaining the endless phrases with great continuity and musical sense' (BBC Music Magazine)

'This is music of spellbinding beauty, and Kirkman's team deliver it superbly' (The Times)

'The blend is immaculate, the sound refined, the impetus well sustained. They relish the play of lines. And they sound devout' (The Sunday Times)

'This is exquisite, intricate music, and the Binchois Consort are ideal interpreters of its subtleties - and they're even more persuasive in the motets and Mass movements by their namesake' (The Independent)

'The Binchois Consort have by now established themselves as pre-eminent interpreters of Dufay's sacred music. Andrew Kirkman has an unfailing touch in matters of tempo, rhythm and vocal balance. The all-male voices are svelte, polished and immaculately in tune. The Consort's beautifully burnished tone is well served by the sympathetic acoustic of All Saints Church, Tooting, faithfully captured by Hyperion's engineers. Add to these an unusually expansive and informative set of booklet essays by Philip Weller and the whole package is irresistible' (International Record Review)