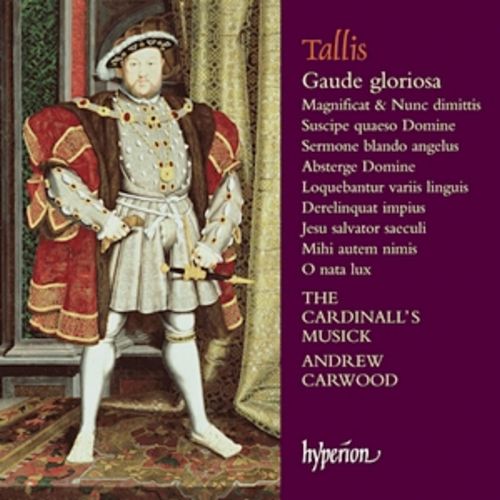 Hyperion’s record of the month for July celebrates the (probable) 500th anniversary of the birth of England’s first superstar composer, Thomas Tallis, and welcomes the signing to the label of The Cardinall’s Musick and Andrew Carwood.

In a fifteen-year history The Cardinall’s Musick has progressively built an enviable reputation for excellence. Some twenty recordings on the ASV Gaudeamus label have seen accolades from around the world, including a Gramophone Award and a Diapason d’Or, while in the concert hall and workshop the group has consistently displayed innovation and a freshness of approach, whether tackling contemporary works (many of them commissions) or sharing the fruits of years of research into the music of the English Renaissance.

With this first recording for Hyperion, The Cardinall’s Musick turns to the period of its namesake, Cardinal Wolsey, and specifically to the music of Thomas Tallis. Gaude gloriosa takes centre stage. One of a series of monumental and extended motets (each lasting getting on for twenty minutes), this should be regarded as the summation of the genre whereas Tallis’s earlier attempts such as Salve intemerata or Ave Dei Patris filia can seem to ramble somewhat, in Gaude gloriosa we find a sure-footed and eloquent response to an unusual text in honour of the Virgin Mary, and a work which takes singer and listener alike into a world of unremitting fervour.

Other works on this recording include the famous Loquebantur variis linguis and O nata lux settings, the five-voice Latin Magnificat and Nunc dimittis, and Suscipe quaeso Domine where a particularly gloomy text (thought to have been written to mark England’s reconciliation with Rome on the accession of Mary Tudor) elicits from Tallis some truly extraordinary and rhetorical effects with harmonic shifts which are every bit as shocking today as they must have been at the work’s first performance in 1554.

Future plans for The Cardinall’s Musick on Hyperion include the completion of their on-going remarkable series encompassing the complete Latin church music of William Byrd.