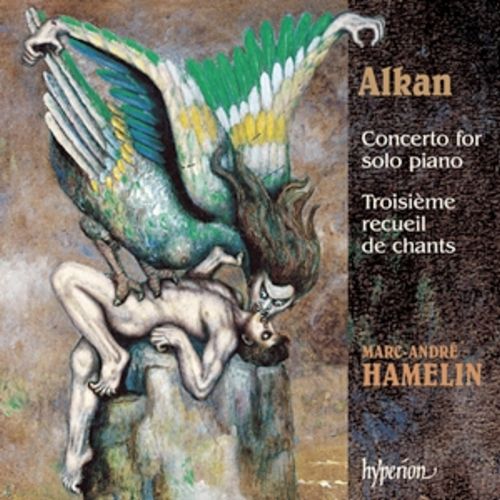 Concerto for solo piano Op 39
Troisieme recueil de chants Op 65
Alkan was one of the greatest composer-pianists in history, with a voice as original as Chopin or Liszt, and a technique that even Liszt admitted was the greatest he had ever known. His music is of surpassing difficulty, and fell into relative obscurity in an age where published music was frequently aimed at amateurs. Its greatness is undeniable but it unquestionably requires performances of unceasing brilliance. Alkan’s Concerto for solo piano is one of the great pianistic high-wire acts an epic work which demands unprecedented levels of technical ability and physical stamina. It is conceived on a breathtakingly grand scale and is rich with both orchestral sonorities and lyrical pianistic passages. The Troisieme recueil de chants is a delightful rarity, rescued here from oblivion by the wonderful Marc-André Hamelin, who with his transcendent technique is simply one of the greatest living performers of this intoxicating music.

'A performance of the Concerto of such brilliance and lucidity that one can only listen in awe and amazement. Scaling even the most ferocious hurdles with yards to spare, he is blessedly free to explore the very heart of Alkan's bewildering interplay of austerity and monstrous elaboration … You can only marvel at such a unique mix of blazing if nonchalantly deployed virtuosity and poetic conviction … All of this is superly recorded and presented, prompting some not unreasonable conjecture: if Liszt feared Alkan's mastery as a pianist he may well have feared Hamelin's' (Gramophone)

'The sheer keyboard brilliance of Hamelin's playing is exceptional. The breathtaking clarity with which he articulates even the most ferocious passages, while unerringly projecting melodic shapes that are often obscured under welters of notes, never fails to dazzle, and the way in which he sustains the huge first movement of the Concerto so that each discursive paragraph seems a natural consequence of what precedes it is a triumph of pure musical will' (The Guardian *****)

'Hamelin's playing here is as breathtaking as ever - it is hard to believe that a lot of it is humanly possible - but, more than simply a dazzling panoply of notes, it conveys a deep musical and expressive range' (Daily Telegraph)

'Hamelin deserves an Olympic gold medal for this extreme musical sport: I doubt that any other living pianist could carry off the work with such secure bedazzlement, not to mention infusing it with refulgent tone and downright charm' (Classic FM Magazine *****)

'This intelligent and magnificently-played programme, displaying contrasting sides of the composer's personality … The Concerto is an engrossing musical journey, ranging from hushed chorale textures to the dizzying cascades of notes that make an orchestra entirely superfluous … The performance is stunning. Aside from over a decade's more experience, Hamelin now has the benefit of Hyperion's stunning recorded sound … As for the performance, if anyone can play it better, expect to see the devil as their agent. It is not simply that Hamelin can negotiate the ferocious technical challenges. Like a great ballet dancer, he maintaines a clarity and beauty of line, so that the shape of the music is always clear and seems natural, however unnatural the demands made by Alkan … This is playing of the highest order in music that should be at the heart of the Romantic repertoire' (BBC Music Magazine)

'One of the supreme examples of pianistic agility in the catalog … The nocturnal slow movement is especially powerful here, its harmonies superbly weighted, its more dramatic moments tinged with a subtle melodramatic chill … Hyperion's sound is excellent too. Highest recommendation' (Fanfare, USA)

'It is an axiom of classical recording that there is no such thing as a Hamelin disc that is anything less than compelling and fascinating. He is the most impressive combination of technique, intellect and fearlessness … The music here is wild, untrammelled and gorgeous and always so dauntingly played that, at times, it defies belief' (Buffalo News)

'Incredibly, Hamelin not only holds this massive work together but also makes it a satisfying musical experience … Hamelin scores with immaculate pianism and, in the lyric pieces, a deceptive simplicity' (Absolute Sound, USA)

'It's great stuff and it's almost impossible to play. Of course, to Marc-André Hamelin everything is possible; he sails through the fiendish passages with incredible ease and panache. The man is not only a world-class artist but possibly the greatest-ever acrobat of the keyboard. The speed, articulation, and clarity of his finger work are simply beyond belief, and at the same time the music keeps singing regardless of the complications' (The Audio Critic, USA)