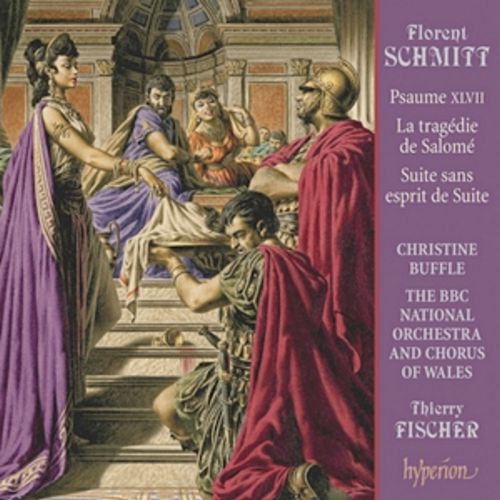 Psaume XLVII Op 38
Suite sans esprit de suite Op 89
La tragédie de Salomé Op 50
One of the great exponents of the extroverted, Dionysiac strain in French music, Florent Schmitt’s influences included such riches as the music of Muslim countries, the symphonic poems of Richard Strauss, and the Russian nationalist composers. Added to his ear for pungent dissonances and assured technique of orchestration, the result is hugely opulent and extravagant music of fertile and thrilling invention. La tragedié de Salomé is Schmitt’s most famous work, staged by Diaghilev and other choreographers and greatly admired by Stravinsky. An air of sensuality and oriental violence is captured by the composer’s entirely original harmonic writing and unusual rhythmic formations which he groups into pulverizing cumulative ostinati. Psaume XLVII is a defiantly unecclesiastical treatment of a sacred text, interpreted by Schmitt as a paean of savage triumph sung by an oriental race. It is a piece of grand rhetoric and almost barbaric élan, recorded here by the Anglo-Swiss soprano Christine Buffle and The BBC National Orchestra and Chorus of Wales under Thierry Fischer.

'The three thrilling and beautiful works recorded here make a strong case for his music … Psalm 47 … is a work extravagant enough for Schmitt to have been termed 'the new Berlioz' … Music that swaggers with barbaric splendour and radiates luxuriant ecstasy … This is a fantastically uplifting musical spectacular! [Suite sans esprit de suite] The work as a whole exudes brilliance and tenderness, wit and charm, and is orchestrated both skilfully and imaginatively … {La tragédie de Salomé] Whether mysterious or furious, Schmitt's command of orchestral magnificence and colour is masterly, as is his ability to characterise through melody and sound. These three works enjoy a resounding and sensitive response from Thierry Fischer and his BBC Welsh forces in music that will surely find popularity through this release … Resplendent in performance and recording quality' (International Record Review)

'[Psalm 47] One of his most stirring pieces. However, his exotic ballet on the Salome story is his masterpiece, and it is scored with great ingenuity; the lesser known Suite, finally, strings together five varied dances … The performances are excellent and full of telling detail' (The Daily Telegraph)

'Thierry Fischer is a committed advocate of this often mesmerising score, and the BBC NOW rises enthusiastically to its challenges, sinister at first, glitzy in the Dance of Pearls, and packing a punch at the end … Christine Buffle is a commanding soloist … The orchestra and chorus clearly have a tremendous time … The rarely heard Suite sans esprit de suite is an engaging bonus in a packed and enticing disc' (BBC Music Magazine)

'Psalm 47 is certainly not for the faint-hearted. It begins and ends in a huge welter of sound, with vigorous dance rhythms and brilliantly coloured orchestration. The BBC Chorus of Wales gives a confident account of music its members can’t have sung very often, if at all. Anglo-Swiss soprano Christine Buffle sings the seductively tender central solo with great tonal warmth, matched by orchestra leader Lesley Hatfield’s supple playing in the accompanying violin obbligato … The orchestral sound in this performance [La tragédie de Salomé' has a seductive tonal allure, and some beautifully phrased woodwind playing, the dance rhythms have a real spring in their heels, and the wordless women’s voices of the chorus and solo soprano Jennifer Walker take their place as an additional tone-colour very effectively. The whole thing is shaped with a keen sense of drama … Hyperion’s recording has depth and presence, and handles the massive wall of sound in Psalm 47 comfortably. This is Thierry Fischer’s first recording as Principal Conductor of BBCNOW; it looks set to be an exciting partnership' (Classicalsource.com)

'Fischer's slightly slower tempos and stunning sonics capture the crushing power of both pieces so well that there's no question of any lack of excitement. The magnificent engineering really counts in this brilliant but also very heavily scored music. The BBC National Orchestra plays with plenty of power... if you don't know this music, here's your chance to get acquainted with two very grand 20th century masterpieces' (ClassicsToday.com)