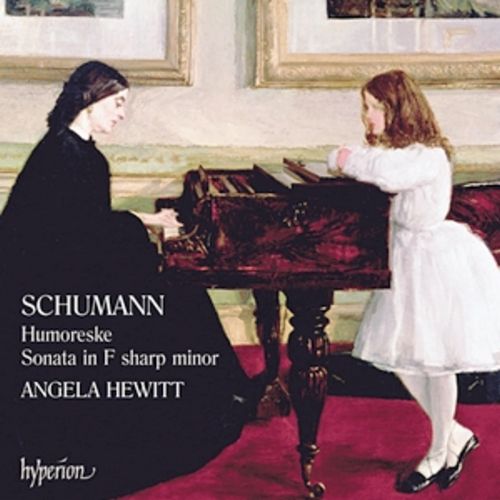 Piano Sonata No 1 in F sharp minor Op 11
Humoreske in B flat major Op 20
Angela Hewitt’s recent Schumann performances in the concert hall were praised for their ‘urgency, jubilation and introspection’ and ‘power and finesse’. Now for the first time she has recorded two of his greatest piano works for Hyperion. Her clean, thoughtful, incisively musical playing which nevertheless allows a flow of passion to be released is perfectly suited to this music.

The Sonata in F sharp minor Op 11 was described by the composer to his beloved Clara Wieck as ‘a cry from my heart to yours’. From the arresting opening to the bouncing Allegro vivace of the first movement and through to the majestic, orchestral-sounding finale, Clara’s imprints are everywhere in the work and Angela Hewitt traces this influence in her scholarly yet deeply personal booklet notes. Humoreske in B flat major was also written for Clara, and is a study of changing and ambiguous moods, melancholy tempered with tenderness, interspersed with dazzling bravura moments including one of the most difficult passages in all his piano works a breathtaking emotional tour de force.

'The clarity of line is a Hewitt hallmark. It is present through the buzzing Allegro vivace, passing from right hand to left and back with seamless fluency, and it soars with the most delicate lightness through the Aria … Hewitt's Scherzo explodes with rhythm … the crushed notes are flashing sparks that might ignite. The Finale almost tumbles over itself with key-changes, expression and dynamics, but Hewitt contains all in a lover's embrace … It is as if genius has stepped out of its trance. This is joyful and exuberant play … A compelling Schumann player' (Classic FM Magazine *****)

'Her technical control remains as poised as ever, but Hewitt pushes much harder at the margins of the expressive world that directs it … In the often problematic F sharp minor Sonata, Hewitt is unreservedly superb, making the music cohere formally without ever undervaluing its flights of lyrical fantasy. For her the slow movement is the emotional heart of the whole sonata, but she is equally impressive in the rangy finale too, boldly characterising its component parts yet always conveying the sense of an organic whole' (The Guardian)

'Angela Hewitt's seemingly effortless but always adventurous interpretations … Her poise and amplitude lend it an unearthly beauty … She holds our attention as no other pianist has, in my experience, quite managed in the giant rondo of a finale … Handsome in fortissimo and mesmerising in sotto voce, the piano range is well served by Hyperion's Italian-based recording' (BBC Music Magazine *****)

'As ever with this pianist, we get playing that is thoughtful, thought-provoking, finely finished and intricantly nuanced. She imbues the opening movement of the sonata with a sure sense of structure and pace, and finds more energy than many of her rivals in the Scherzo' (Gramophone)