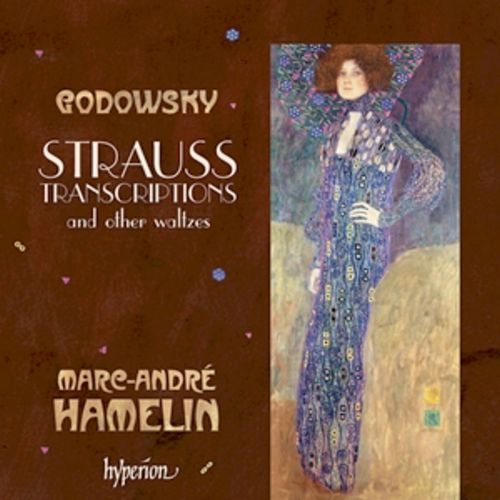 Strauss transcriptions and other waltzes
Marc-André Hamelin’s programme is mostly devoted to Godowsky’s works based on themes by or directly inspired by Johann Strauss II. It is not intended to be a comprehensive survey but is, nevertheless, fully representative of Godowsky’s finest reflections on the Waltz King. In the three great Strauss transcriptions, Godowsky elevated the art of the piano paraphrase to a higher musical and pianistic plane; however their extreme technical difficulty remains a striking feature and places them out of the reach of ordinary pianists. And Marc-André Hamelin is, of course, no ordinary pianist in fact his playing on a recent disc (see below) was compared to that of Alkan and Liszt.

Triakontameron and Walzermasken are rarely performed examples of Godowsky’s original work, and continue the composer’s love-affair with the waltz they are written entirely in 3/4 time.

The last work on this dazzling disc is an oddity indeed, a rarity. Sometime prior to 1925, Godowsky made a piano roll of his arrangement of The Last Waltz by Oscar Straus (1870–1954), the Vienna-born composer. The eponymous Waltz is heard throughout the 1920 operetta. The music of Godowsky’s transcription was never published for some unknown reason it is a uniquely appealing arrangement. In the early 1970s, Gilles Hamelin, the pianophile father of Marc-André, notated, arranged and edited The Last Waltz from Godowsky’s piano roll, which was then published in 1975. Shortly afterwards, a copy of the negative of Godowsky’s manuscript was sent to Gilles Hamelin. It was all but illegible, so Hamelin Snr. made a fair copy in his own hand: in almost every respect it tallied with the version he had transcribed from the piano roll.

'Cultured musicianship, extraordinary keyboard proficiency and unflappable tonal control … Hamelin is a seasoned and subtle orchestrator at the piano … Some of Hamelin's most poetic, lyrically inspired playing on disc. All told, a stellar achievement, graced by Hyperion's close-up yet ample engineering' (Gramophone)

'There's no need for analogies about a surfeit of Viennese cream cakes with this excellent CD: the musical invention is so brilliant and varied, and the performance so coruscating, that one's attention is firmly held. The liner note is genuinely illuminating' (BBC Music Magazine)

'Marc-André Hamelin, it hardly needs saying, is precisely the pianist for this music … No-one since Godowsky's son-in-law, David Saperton, has played it with such discernment; and not even Saperton had Hamelin's technical command or his variety of timbre, touch and mood … Bravura handled with exquisite tact. If you are looking for an example of pianistic grace under fire, you won't find anything better … All in all, a caviar release' (International Record Review)

'How many fingers does Hamelin have? Thirty would be a conservative estimate, though the magic of his piano playing lies in his subtlety and flow, never in any shallow brilliance … The succulent recording is the cherry on the cake' (The Times)