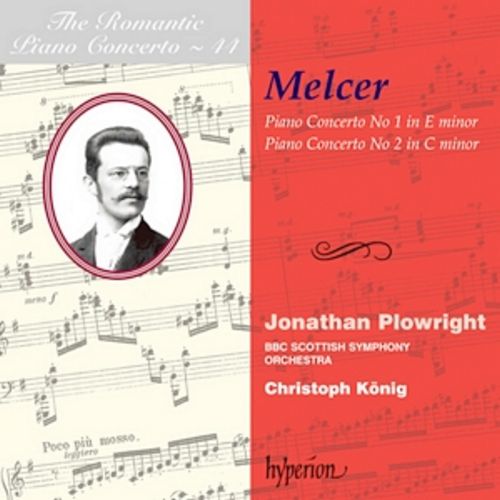 Piano Concerto No 1 in E minor
Piano Concerto No 2 in C minor
Hyperion’s celebrated Romantic Piano Concerto series reaches volume 44. This disc includes two prize-winning concertos written in the 1890s by the Polish composer-pianist Henryk Melcer. The first is written in the style of Liszt and Chopin, and is notable particularly for its thrilling finale which is marked by its strong Polish character: starting as a mazurka, the accelerando through the movement increases the excitement of the piece, giving it the frenzy of a kujawiak or oberek. The second concerto was also appreciated by contemporary critics for its imaginative use of Polish themes: one reviewer writes of ‘themes full of expression in Polish character that are developed so splendidly and broadly that they leave us enraptured … an unforgettable impression remains after hearing the Concerto’. This work demands particular technical virtuosity, versatility and stamina on the part of the pianist, who is playing almost continuously.

'The Second Concerto from 1898, also in three movements, is crowned by a hair-raising final Allegro con fuoco, a remarkable tour de force which, were it ever to be heard in a concert hall, would have you on your feet at the end cheering … Plowright enhances his glowing reputation as a musical alchemist of rare distinction with a transcendent technique' (Gramophone)

'Jonathan Plowright explores more of the Polish keyboard repertoire with these technically unforgiving but hugely enjoyable late 19th-century works by Henryk Melcer. The first bursts with melodic invention … The second requires tremendous stamina from Plowright, who plays almost continually, ending with a massive final allegro that will take your breath away. Christoph König and the BBC Scottish Symphony Orchestra accompany with panache' (Observer)

'Melcer's own abundant originality shines out frequently, notable in the marvellously poetic latter portions of the first movement of the C minor Concerto … Jonathan Plowright and Christoph König have done a superb job of absorbing Melcer's idiom. Care over both works' expressive rhetoric is everywhere apparent in performances that suggest affectionate familiarity … Clearly a distinguished addition to this fascinating series' (BBC Music Magazine)

'This Hyperion release is simply stunning. Jonathan Plowright taps into the Polish vein with the required vision and power … The plaudits for Plowright … confirm a colossal musical mind and matching technical ease' (International Record Review)

'If the First Concerto is a heroic barnstormer in post-Lisztian mode, the Second … is flavoured with Chopinesque, neoclassical reminiscences, a la Saint-Saëns, and features an utterly enchanting second theme and infectiously dance-like finale. Plowright sounds completely unfazed by even the most note-splattered pages, throwing himself into the fray with abandonment and aplomb' (Classic FM Magazine)

'Jonathan Plowright provides a masterclass in dexterity at the keyboard, rising to meet all of the composer's challenges with a combination of scintillating virtuosity and deft sensitivity. The end of the C minor Concerto's opening movement is particularly telling, as he delivers the brilliant cadenza with utter authority before gently whisking the music away with a flourish of almost impossibly quick semiquavers. Plowright is adroitly partnered by Christoph König and the BBC Scottish Symphony Orchestra, who more than do justice to Melcer's imaginative orchestrations whilst also relishing the frequent interplay between soloist and ensemble' (MusicalCriticism.com)

'The Second Concerto is on a larger-scale (37 minutes), the first movement opening with the piano alone, somewhat introspectively, in the manner of one of Brahms’s ‘late’ piano pieces, with some decorous woodwind interjections lightening the mood, the strings increasing the pace with dramatic impulse. The piano, not stirred, continues to muse, but the combatants, if they are, then become heated together as the movement progresses – with plenty of pianistic fireworks – and without compromising the piano’s ability to express regretful feelings in a shapely manner … The slow movement begins unexpectedly – with a trumpet solo, sounded as if from a barracks and somewhat ‘Last Post’, before the piano enters with a haunting melody that is to dominate – and will prove equally effective on full strings. The finale is scintillating and, at 3’14”, there arrives a majestic passage that could pass as a National Anthem! Throughout Jonathan Plowright plays with dedication, affection and technical aplomb and is well supported by the BBC Scottish Symphony Orchestra and Christoph König. The recorded sound is superb – with ideal balance between piano and orchestra and between warmth, presence and clarity – and is transferred at a level that respects dynamic variety. Joseph A. Herter’s booklet note is enlightening' (ClassicalSource.com)