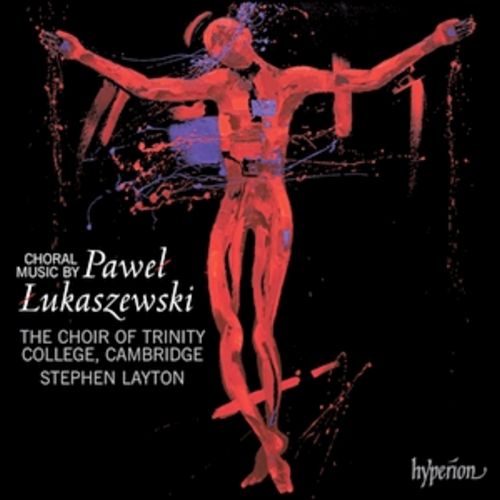 This latest disc from Trinity showcases the talent of this marvellous young choir in a disc of seductively beautiful spiritual music from Poland.

Pawel Lukaszewski is the most outstanding of the younger generation of Polish composers specializing in sacred choral music. His ability to encapsulate the expressive essence of a text with immediacy and economy of technical means is unrivalled, as is his facility of idiomatic vocal writing. He has an enormously subtle and varied harmonic palette unlike some of his contemporaries and creates an organically new harmonic world for each piece. His extended tonal sound world is enriched by highly selective use of vocal effects such as glissandi, parlando (speaking) and susurrando (whispering), all of which occur invariably in direct response to clear textual stimuli.

A generous selection of Lukaszewski’s considerable output is recorded here, including the sequence of seven Advent Antiphons composed in 1995–9. Lukaszewski’s extended settings cover a vast expressive range: from the dark eight- and twelve-part sonorities of O Clavis David to the ecstatic concluding superimposed thirds of O Oriens.

Conductor Stephen Layton is one of Lukaszewski’s most enthusiastic proponents indeed he is the dedicatee of the most recent work on this disc, the Nunc dimittis from 2007. He communicates this deep understanding of Lukaszewski’s music to his young singers, coaxing from them a committed and potent performance.

'This is a lovely disc of enchanting choral music … Only the hardest of musical hearts will remain unmelted by such committed interpretations. [Nunc dimittis] In its beautifully measured phrases, immaculately tailored textures and ingenious use of light and shade to invoke light shining in darkness, it is a gem which receives here a beautifully poised account … Here is a composer who really is a true master of the art of a cappella writing. In saying that it has been difficult to draw this CD out of my player, so frequently have I returned to it, I can offer no higher praise' (Gramophone)

'Layton's affinity with this radiant, accessible music is clear as he guides the Trinity College Choir, which sings with passion and purity throughout the programme' (BBC Music Magazine)

'Stephen Layton conjures magical and sophisticated performances from the Choir of Trinity College, Cambridge, and I imagine that the composer must be in seventh heaven' (International Record Review)

'With performances as sonorous and acutely paced as these, they come across with a winning fervour. Layton's advocacy is certainly vindicated' (The Daily Telegraph)