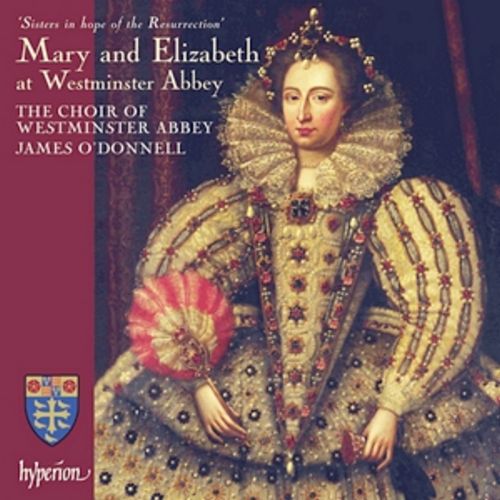 Mary and Elizabeth at Westminster Abbey - ‘Sisters in hope of the Resurrection’
This ambitious new recording from Westminster Abbey tells the story of the religious and political turmoil that engulfed England in the sixteenth century, and from which composers of liturgical music could find no escape. They were forced to follow the changing edicts about permitted texts as the pendulum of power oscillated between traditional and reformed religion. Interestingly, this period saw the greatest flowering of church music in England’s history; some of the most magnificent works of the age are recorded here.

November 1558 is the chronological centrepoint of this disc. The first half of the programme consists of music performed (not necessarily in all cases composed) during Mary’s reign; the second half, beginning with the evening canticles from Sheppard’s Second Service, explores something of the immense variety of sacred music produced during the subsequent, much longer and more celebrated reign of Mary’s Protestant half-sister.

'The beauties of this disc of 16th century choral music are many and various. The repertoire's selection and arrangement is inspired, the singing some of the best I've heard on CD … As a showcase for English choral singing at its most charismatic, this deserves to be widely heard' (Gramophone)

'The Choir of Westminster Abbey sings fresh, committed and emotionally compelling accounts. Many overpowering moments take place during Mundy's Vox Patris Caelestis … James O'Donnell shapes vocal lines with a keen sense of drama … The brilliance of the programming matches that of the singing' (BBC Music Magazine)

'This is spectacularly fine singing, with James O'Donnell's obvious affection for the repertoire drawing from both boys and men some exquisite performances … the Westminster choir's most beautiful release to date' (International Record Review)