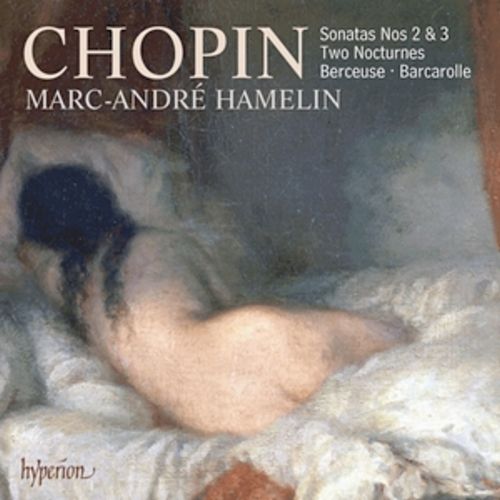 Berceuse in D flat major Op 57
Piano Sonata No 2 in B flat minor Op 35
Two Nocturnes Op 27
Barcarolle in F sharp major Op 60
Piano Sonata No 3 in B minor Op 58
Recent discs from Marc-André Hamelin have concentrated on music which is obscure, under-recorded or virtually unplayable. However in this latest recording he turns his attention to two mainstays of the Romantic repertoire: Chopin’s Piano Sonatas Nos 2 and 3. The results are simply staggering: playing of matchless brilliance and consummate artistry, stunningly recorded. As a recent critic of Hamelin’s live performance of the B minor sonata remarked, ‘Hamelin starts where most other pianists leave off … such was his control that frequently it seemed as though an extra dimension were being added, the music’s teeming internal life clarified by his ability to voice the inner parts’. The disc is completed by some of Chopin’s greatest single-movement works; the contrasting two Nocturnes of Op 27, the extraordinarily colouristic Berceuse Op 57 and the monumental Barcarolle in F sharp major. We think this is one of the most authoritative and important Chopin discs to have appeared in recent years an unmissable release.

'Though Hamelin has made many fabulous discs, particularly in repertoire of superhuman virtuosity, this is one of his very finest achievements to date' (Gramophone)

'Chopin’s second and third piano sonatas lie at the heart of the Romantic piano literature, and Hamelin, a poet among virtuosos, brings sensibility and a brilliant technique in equal measure to this oft-recorded music … This is the Chopin of a true Romantic, spellbinding at its (considerable) best and superbly recorded' (Sunday Times)

[Third Sonata] 'Hamelin's impeccable pianism allows him to make light work of the most demanding passages. The first movement is as imposing as you would expect of a player renowned for his staggering virtuosity, but a solid framework also underpins moments of wonderful delicacy. Hamelin builds the Second Sonata just as unerringly, producing a poetic and passionate performance that is finally carried off on a spectral wind … Hyperion's new release adds up to a hugely satisfying Chopin recital' (BBC Music Magazine)