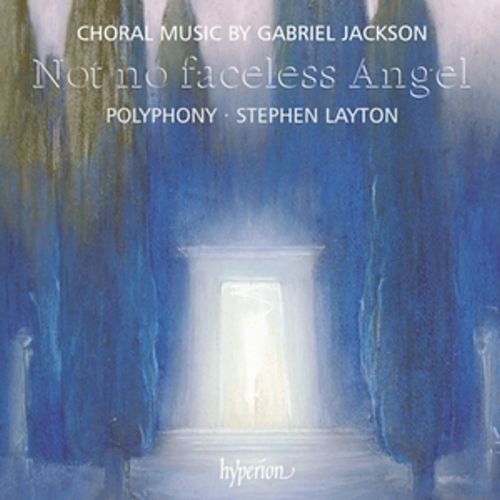 Jackson: Not no faceless Angel and other choral works

Polyphony’s recordings of contemporary choral music are among Hyperion’s perennial best-sellers and have introduced thousands of listeners to magical new worlds of sound. On this new disc for Hyperion, under their inspirational director, Stephen Layton, the composer Gabriel Jackson gets the Polyphony treatment. The result is a dazzling collection which will inspire and enchant the listener.

Gabriel Jackson’s uniquely appealing choral works have made him one of the most familiar names in the repertoire today. His liturgical pieces are in the repertoires of many of Britain’s leading cathedral and collegiate choirs and in 2003 he won the liturgical category at the inaugural British Composer Awards. His music is deeply attractive: meditative, contemplative, and unashamedly spiritual.

'An absolutely outstanding choral recording … after hearing that performance from Polyphony directed by Stephen Layton, it’s hard to believe that there’s another vocal ensemble that could bring such radiant perfection of voice and ensemble to bear on this music. Some of the sounds are just heart-stoppingly beautiful. A surfeit of beauty? Maybe, but such synergy of imagination and performance.' (BBC Radio 3, CD Review)

'There are many striking features of this ravishing disc, beautifully and imaginatively performed by Stephen Layton and Polyphony … Jackson possesses an instinct for acoustic and vocal texture, but the beauty and sheer appeal of his vocal works, challenging as they are, are sculpted by an energising pragmatism open both to the professional and ambitious amateur choir' (Gramophone)