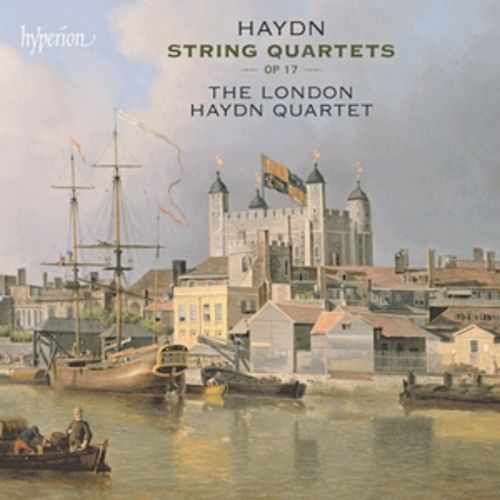 performed from the London edition published by Welcker c1774 (Nos 1-6)
Haydn’s String Quartets Op 17 were written during his most effusively productive period, during his tenure in the service of the Esterházy family. He had a magnificent group of musicians at his disposal, including the young virtuoso violinist Luigi Tomasini, whose genius can be traced throughout these works, particularly in the achingly beautiful melodies of the adagio movements. These string quartets mark Haydn’s emergence as an indisputably great composer. They have a seriousness of intent and an increasing mastery of rhetoric and thematic development that are a world away from the lightweight divertimento-quartets that he was formerly producing.

They are performed here on period instruments by the dazzling London Haydn Quartet, whose disc of the Op 9 quartets drew the most extravagant praise from the critics. Their second disc has been eagerly awaited, and comes as part of Hyperion’s celebrations of ‘Haydn year’.

MUSICWEB.COM RECORDING OF THE MONTH

'Gut strings sometimes mean sour intonation, but not with this superb British group. Formed out of love for Haydn, they explore his repertoire with a light touch and kaleidoscopic colours. This second Hyperion survey brings the six op 17 quartets … crammed with subtle pleasures. A set to bring long-lasting pleasure' (The Times)

'Playing with gut strings and classical bows, the London Haydn Quartet bring both freshness and depth to the six works that the composer wrote at Esterhazy in 1771' (The Daily Telegraph)

'This splendid recording … Catherine Manson brings a nice rubato to the violin's flight in the first movement of Quartet no 5, and makes the most of the operatic recitative in the Adagio' (Classic FM Magazine)

'These musicians arrest attention by the variety of their bowing and articulation. They lean into notes, swelling and contracting the sound … to heighten the potential for expression … A very imaginative interpretation' (Gramophone)