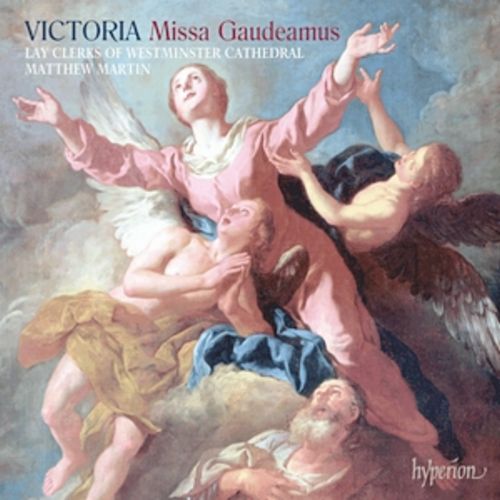 a liturgical sequence for the Feast of the Assumption, with organ works by Girolamo Frescobaldi
A new recording from Westminster Cathedral features the gentlemen of their choir in a fascinating programme which brings to life the musical and liturgical traditions of this foundation.

This recording by the lay clerks of Westminster Cathedral presents a full choral, and instrumental, celebration of Mass for the Feast of the Assumption of the Blessed Virgin Mary, which falls on 15 August. It is based on music by two major composers, Tomás Luis de Victoria and Girolamo Frescobaldi. Victoria’s Missa Gaudeamus provides the central feature of an elaborate liturgical sequence in which other music including motets by Victoria, Mass Propers and other passages of chant, and organ music by Frescobaldi in several forms is interpolated between the movements of the Mass Ordinary. This festive celebration of Mass is intended not as a reconstruction of a known occasion in the early seventeenth century, but as a sort of musical offering that illustrates the complex liturgical structures becoming available in a period when the resources for the enrichment of the liturgy were growing steadily.

'Westminster Cathedral's 19 Lay Clerks give a beautifully paced rendition of Victoria's rarely performed (and even less often recorded) Missa Gaudeamus … The choral blend is - as might be expected - superb and exquisitely balanced. The countertenors soar to amazing heights without the slightest hint of strain … This benchmark recording is another superb addition to both Hyperion's and Westminster Cathedral's illustrious Victoria discography' (Gramophone)

'An elaborate musical mosaic, the appeal of which owes much to the atmospheric depths of the Westminster acoustic, beautifully captured on this recording' (Financial Times)

'It makes a compelling whole, sung with rapt purity by the male voices of Westminster Cathedral choir' (The Guardian)