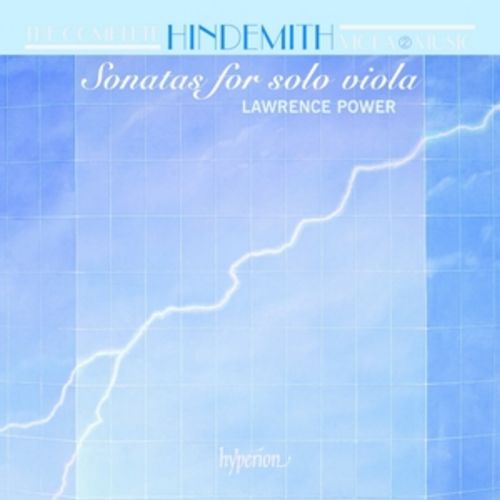 Sonatas for solo viola:
Sonata Op 11 No 5
Sonata Op 25 No 1
Sonata Op 31
Sonata (1937)
Lawrence Power, Britain’s acknowledged greatest living viola player, continues his fascinating and acclaimed series of Hindemith’s complete viola music. This second disc features Hindemith’s solo viola sonatas. These works were all written for Hindemith himself to perform, and are thus are of special significance as near to a personal testament, an intimate soliloquy, as exists in his multifarious and genre-spanning output. The shadow of Bach lies over any composer writing a solo string sonata, and this is clear in the Passacaglia Op 11 No 5 Sonata, where Hindemith’s ultimate model is unmistakably the famous D minor Chaconne from Bach’s second violin partita but viewed through a post-Brahmsian sense of sonority and architecture that produces a truly contemporary result. This ardent (and arduous) movement, a most impressive compositional feat, is the first example of a form which was to be one of Hindemith’s trademarks throughout his career, and it makes the Sonata something of a personal manifesto of artistic ambition. In later sonatas the severity of Hindemith’s mature style becomes evident but harnessed, here, to the extraordinary virtuosity of the composer-performer, it gives rise to the most exhilarating and eloquent music.

'Power's performances - characterised by his trademark tonal richness and easy, almost nonchalant technical brilliance - leave no doubt about the weighty seriousness of the music, and its significance for Hindemith' (The Guardian)

'Paul Hindemith, himself a major viola player, left one of the most important of 20th-century legacies for his own instrument, including the four solo sonatas recorded here. They make a protean collection … Op 25 No 1, written in 1922 when Hindemith was at his most radical, includes a movement marked “Wild. Tonal beauty is of minor importance.” Lawrence Power easily encompasses the many moods. He has a giant sound at his command – he can make the instrument sound as if it’s being played by a man striding with seven league boots – and he makes every moment gripping' (The Irish Times)