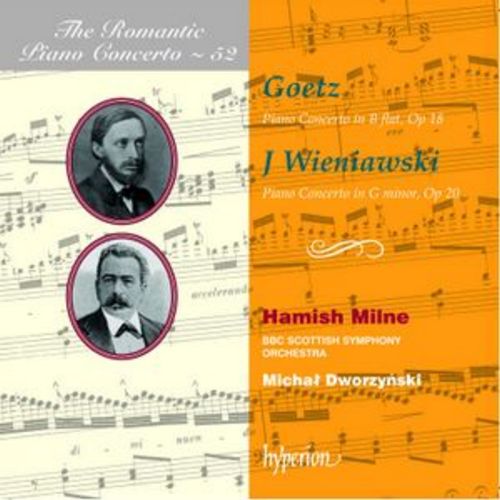 Wieniawski:
Piano Concerto in B flat major, Op 18
Hermann Goetz was born in 1840 at Königsberg (now Kaliningrad), the son of a brewer. He fulfilled his long-standing desire to become a musician at the age of twenty when he went to Berlin’s Stern Conservatoire in 1860. Of his teachers there, the most significant was the pianist and conductor Hans von Bülow, Liszt’s son-in-law. Three years later Goetz moved to Winterthur in Switzerland as a church organist, but this was also a doomed attempt to cure the tuberculosis he had contracted in childhood. Brahms visited in 1865, and they became uneasy friends (not uncommon in relationships with the greater man), but two years later Goetz enjoyed an annus mirabilis when he married, resumed contact with von Bülow and met Raff, who recommended him to the music publishers Breitkopf und Härtel.

This period of hope and optimism was the time during which he wrote his Piano Concerto in B flat major, Op 18 (he had drafted an earlier piano concerto as a student), and his finest chamber work, the Piano Quartet in E major, Op 6. It was not long before his works included Lieder, choral works and a symphony (of which only a fragment remains). This symphony was played at Basle on 3 March 1867, but it was his opera Der Widerspenstigen Zähmung (produced in Mannheim in 1874), based on Shakespeare’s Taming of the Shrew, which brought him fame both at home and abroad. His Symphony in F major owes much to Beethoven, as most of that genre does in the half-century between Beethoven and Brahms, and was excessively praised by George Bernard Shaw. In 1875 Goetz made a brave attempt at a second opera (Francesca von Rimini), but it was a race against time that he lost the following year when he finally succumbed to his illness four days short of his thirty-sixth birthday. As with so many composers who fail to achieve the highest rank, his music was rarely played after his death. Though overshadowed by many greater composers during his lifetime, and despite being based outside the mainstream of musical activity in his isolated small Swiss town, his distinctive music is full of melodic gift and mastery of form.

Goetz finished the full score of his Piano Concerto in B flat major on 2 October 1867, though its cadenza (played on this recording) was only notated by him in 1873. Its first performance took place at Basle on 1 December 1867, when he made his third appearance that year in his own works. It proved to be the most successful of his orchestral works played during his lifetime, and was praised by the local press (Basler Nachrichten, 4 December 1867) as ‘evidence of his outstanding talent, crafted, melodious, fiery and reflective, with a brilliant piano part. It is effective without playing to the gallery, and is, in the best sense of the word, modern’. The review concluded with a hope that it would be taken up by the first-rank concert organizations in Germany. Attempts to have it programmed at Leipzig, Germany’s musical epicentre at the time, failed during the next two years (‘If I was a pretty girl, I would have succeeded; I’m afraid that’s all that matters there’, Goetz moaned to Joseph Widmann in November 1869). He played it twice in Zurich, on 22 December 1868 and 3 March 1874, his last appearance anywhere as a pianist. Later that year he sent it to his amanuensis Ernst Frank at Mannheim with a caveat: ‘You’ll have to look through it with care before the message becomes clear. Do so three to seven times before you decide whether or not you want to perform it in public.’ This was a strange piece of advice, as the music has little about it which implies either a hidden message or emotions of great depth; on the contrary its folksong-like immediacy and melodic warmth find a welcome with any concert audience then and now. Goetz clearly rated the concerto, especially the second and third movements (‘flawless’), but wanted no preferential treatment or favours from Frank: ‘It must come to mean something really special to you. If it does, then that’s fine and would please me much.’

Frank eventually performed the concerto on 7 November 1876. Goetz wrote some last-minute advice at the end of October: ‘How unselfish of you to spend such time-consuming hours on finger studies! I am quite ashamed and only hope you get pleasure from it. The first movement is not easy and makes most demands on virtuosity. On the whole I did not have enough strength, but you will. My music requires a Chopin technique as you find in his Etudes Opp 10 and 25, his Nocturnes, Scherzi and Polonaises. Brahms needs a Schumann technique.’ Goetz’s gratitude and modesty shine through in a final letter (4 November): ‘I must think of you and your dear fists. You are thinking more than usually of me, but whether in a friendly way is another matter. Here and there a curse will escape you at such and such a nasty place, but when the wretched passages are under control once and for all, the orchestra is there and the interplay begins, hopefully you will still find pleasure in the music and the public in you.’

Hermann Goetz’s Piano Concerto is one among many in the genre that have been overlooked, though it has had some welcome revivals in recent years. It is music which is grateful on the ear, and virtuosic in a more subtle than usual display of technical difficulties. Its themes are charming and their development imaginative. The scoring favours solos for oboe, clarinet and horn, while Goetz manages to shun the German nineteenth-century trap of dense orchestration (double winds, two each of horns and trumpets, timpani and strings). Above all, Goetz’s music is open-hearted, possessing a freshness and optimism that belie his own appalling physical condition. His melodic gift shines through, while his harmonic language attempts nothing too adventurous, even in the wake of all that Wagner was doing at the time to break the mould of conventional thought on the subject. After all, by 1867 Tristan was already two years old, so too Brahms’s German Requiem, the other work which impacted heavily on composers and audiences of the day. True, we detect the sound and musical language of Schumann and Chopin in the style, but as with all good music, Goetz’s Piano Concerto ultimately bears its own identity.

The Polish pianist and composer Józef Wieniawski was born in Lublin in 1837, the younger brother, by two years, of the more famous violinist Henryk. Józef studied at the Paris Conservatoire under Pierre Zimmermann and his pupils Antoine Marmontel and Charles-Valentin Alkan. He also received lessons from Liszt. At the age of twelve he had already won first prize in a Conservatoire competition, and the following year formed a duo with his brother with which they began to make names for themselves in the musical circles of the French capital. Their reputation was particularly enhanced by a duo written by their uncle, the famed virtuoso pianist and composer Eduard Wolff, an intimate friend of Chopin (who had just died). Wolff’s influence now became crucial to their respective burgeoning careers. This was a time when virtuoso performances of instrumental paraphrases of operatic arias and ensembles were all the rage, particularly in the salons of the city. In 1850 the young Józef was acclaimed for his playing of Thalberg’s Introduction and Variations on the Barcarole from Donizetti’s L’Elisir d’amore, Op 66, and, together with his brother Henryk, a fantasy (by Henryk) on themes from Le prophete by Meyerbeer. From 1857 Józef began to undertake extensive tours of European capitals, but in 1866 he moved to Moscow, where he taught at the Conservatoire. In 1869 he founded his own music school, and was appointed director of the Warsaw Musical Society in 1875–6.

Wieniawski was particularly renowned for his tireless championing in the West of the music of the nationalist Polish composer Stanislaw Moniuszko. Finally he moved to Brussels where, as a chamber music player and accompanist, he took a prominent part in the musical life of the city, and became a professor of piano at the Conservatoire. He died in 1912.

Wieniawski’s compositions for the piano are understandably vehicles to showcase his virtuosity in the concert hall and private salon. They include polonaises, waltzes, mazurkas and concert études, as well as a Fantaisie and Fugue, two piano sonatas and a Duo Polonaise. There is a little chamber music consisting of a string quartet, piano trio and cello sonata; and for orchestra he wrote a Suite romantique, the Overture Guillaume le Taciturne, a Reverie Op 45, and the Piano Concerto in G minor Op 20, written in about 1858, published in Warsaw in 1860, and dedicated to Leopold II, King of the Belgians.

In the tradition of piano concertos such as those by Chopin and Liszt, Wieniawski’s highly attractive work has relatively little regard for the orchestral contribution other than to give the soloist the occasional rest. After only a couple of dozen bars of introduction, the piano enters with its first cadenza (there is another substantial one before the coda), out of which emerges the material of the first movement. The music is peppered with instructions such as risoluto, furioso and grandioso, which emphasizes the Sturm und Drang character of the music. The piano plays for most of the time, no distractions wanted by its attention-seeking composer-pianist, and indeed the few orchestral ritornelli are dispensed with in unseemly haste. A recurring six-note dotted motif is thoroughly elaborated, a contrasting theme is more reflective, while the florid writing for the piano’s right hand owes much to Chopin.

Like Schumann’s Piano Concerto, the slow movement Andante (in E flat major) has charm and simplicity. It begins with clarinets, bassoons, horns and pizzicato muted strings in dialogue with simple chordal material presented by the piano; it continues in this mood of lyrical cantando with almost inaudible lower-string reinforcement to sustain the bass line. The strings are muted throughout, which contrasts starkly with the Rondo finale that, having been introduced by a brass fanfare, bursts forth in a blaze of Polish bravura. This demands a spectacular display of technique, living proof of Wieniawski’s own brand of virtuosity. The piano-writing, particularly during unaccompanied episodes, is often characterized by clearly intended discords. It is as if Wieniawski distorts a consonant chord with a single ‘wrong’ note creating the impression of a ‘smudge’ (we hear a C natural in a chord of F sharp minor, or an E natural against E flats in a dominant seventh chord of F major). Perhaps this was a mischievous comment on contemporary pianists, and that he, the composer, would take charge of their slips by prescribing them in the score. With only sixteen bars rest in which to take breath in this finale, the soloist has much to say, and does so in spectacular fashion.