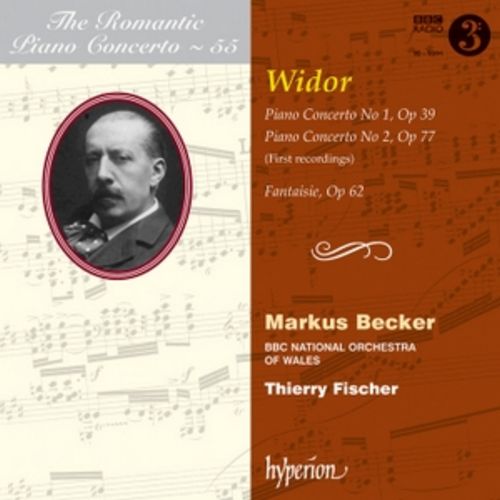 5 Allegro con moto patetico [6'46]
6 Andante [5'25]
7 Tempo deciso [7'17]
Charles-Marie Widor was born in Lyon to a family of organ builders and consequently became an organist of great skill and an assistant to Camille Saint-Saëns at La Madeleine in Paris at the age of twenty-four.

Today, Widor’s compositions for organ have a prominent position in the instrument’s core repertoire, but it is often forgotten that the composer wrote many other significant works, notably his two piano concertos. Surprisingly, these are the first recordings of the concertos and are a much-awaited addition to the numerous world premiere recordings featured in Hyperion’s Romantic Piano Concerto series, now reaching its 55th volume and still unearthing little-known works to consistently dazzling effect.

Following the success of his renditions of the Draeseke and Jadassohn concertos, pianist Markus Becker makes a welcome return to the series. The BBC National Orchestra of Wales and the remarkable Thierry Fischer more than do justice to Widor’s imaginative orchestrations.