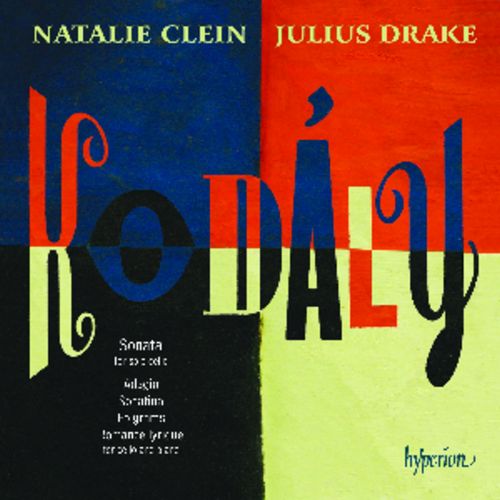 Sonata, Op 8
Sonatina
9 Epigrams
Romance lyrique
Adagio
Zoltán Kodály occupied a position in Hungary much like that of Vaughan Williams in the United Kingdom: as the great national composer who, by his discovery and creative use of his folk-music heritage, and the role he must play in society as an educator and fulfiller of cultural needs, forged the standard by which twentieth-century Hungarian music should be judged. He was a protégé and colleague of Erno Dohnányi and a lifelong friend of Béla Bartók (in the early 1900s they went on prospecting expeditions together, to collect folksongs in the remotest villages of Hungary). But he was more concerned than them to bring home the reality of Hungary’s musical heritage to Hungarians, rather than to place it on the European or transatlantic stage. As he himself said: ‘One can approach what belongs to all humanity only through one’s own national characteristics’ and paradoxically Kodály’s music is known and loved all over the world; he seems to speak to every audience in a language they can understand. Most celebrated as a choral composer, he created an entire repertoire of small-scale choral pieces for teaching and concert-giving. This output is punctuated, however, by notable chamber, orchestral and choral works which testify to a powerful mastery.

For Liszt or Brahms, ‘Hungarian’ music wasn’t the songs and dances of the peasantry, but the cosmopolitan music that had been developed by gypsy violinists and entertainers: the pseudo-folk verbunkos style, which amalgamated features from various traditions (nineteenth-century courtship and recruiting dances, for instance), its characteristic measure being the fiery or sentimental csárdás. Bartók and Kodály, as professional ethnomusicologists, uncovered the older, more authentic Hungarian folk music by going into the countryside with a phonograph and recording the actual melodies people sang and danced to. It was a discovery of enormous significance the recovery of a national heritage, a national identity, just when Hungary was seeking liberty from the dying Austrian Empire.

In 1906, the year they published their first joint collection of Hungarian folksongs, Kodály composed his graduation piece from the Budapest Academy of Music: the orchestral poem Summer Evening, already infused with the modal melodies, the florid arabesques and characteristic rhythms of Hungarian folk music. This lush, delicately evocative nature-impression is a symphonic poem comparable to early orchestral works of Dohnányi or the more contemplative movements of Bartók’s contemporary orchestral suites. But rather than pursuing orchestral music after Summer Evening Kodály after a decisive encounter with the music of Debussy and appointment as professor of composition at the Budapest Royal Academy took an entirely different path, with an astonishing succession of chamber works for string instruments which focused his creative energies for over a decade. Through them he became a mature artist. All are conceived on a heroic scale; all push the techniques of their chosen instruments to the limit. In abstract forms quartet, sonata, duo they show a unique and original fusion of classical formal principles with the new harmonic and melodic resources Kodály and Bartók had assimilated on their folksong-collecting expeditions.

Nothing like them had been seen before in Hungarian or maybe in European music. In his concentration on this one area of the repertoire Kodály showed himself even more single-minded than Bartók, and at this stage of their respective careers it would be hard to say which was the more radical composer. Kodály seemed to achieve more powerful results the fewer instruments he dealt with. He displayed elegant formal grasp and structural sophistication in his two string quartets, but these warm-hearted works are surpassed for sheer passion and epic sweep by the violin-cello Duo (1914), whose two players are enabled, by Kodály’s brilliant technique, to sound like a veritable string orchestra. Above all towers the amazing, ardent, pugnacious Sonata for solo cello (1915), one of the greatest utterances in this most demanding of genres since J S Bach’s solo cello Suites. (Bach was, needless to say, an inspiration to Kodály throughout his life; his arrangements of various Bach keyboard pieces for string instruments are a significant pointer to his compositional concerns.)

Kodály had been declared unfit for military service in World War I, and instead, while continuing his studies in Hungarian folk music and composing, worked with a volunteer group that was devoted to defending the principal monuments in Budapest. It is important to remember that the Sonata was a wartime work, which gives a tragic edge to the sense of prophetic utterance, especially in the first two movements. It was because of the war that it had to wait three years for its premiere. It is dedicated to the cellist Jeno Kerpely, of the Waldbauer-Kerpely Quartet, an ensemble that championed contemporary Hungarian chamber music and gave the first performances of Kodály’s two quartets and the first two quartets of Bartók. Kerpely premiered the Sonata in Budapest on 7 May 1918. There are three large-scale movements, and Kodály boldly extends his tonal palette by the use of scordatura retuning the instrument’s strings to make possible a different range of harmonies and tone-colour. The C string is tuned down to B, the G string to F sharp, and while the music is notated as normal, these ‘mistunings’ mean that the sound produced often diverges from the printed notes. They also appear to help Kodály to produce passages of intense polyphony where each string seems to have its own colour, and indeed there are passages in the work where the single cello sounds like a whole orchestra, or a range of different instruments.

The sonata begins with a majestic, passionate Allegro maestoso ma appassionato, full of bold, authoritative gestures and truculent exclamations. The impression of a highly emotional monologue is unmistakable. While the opening subject makes much use of massive triple- and quadruple-stopped chords, a pleading, highly emotional second theme is more melodically based and taps deep into a contrasting lyrical vein. Both themes span the entire range of the instrument, and both in their different ways are redolent of sublimated Hungarian folk music. The development climaxes in a passage of furious trills at the top of the cello’s register, while the movement ends with a melancholic coda based on the second theme.

The central Adagio, marked con grand’ espressione, begins with a dark, meandering, low-lying melodic line that flowers into a highly decorated melody with the character of a desolate folksong, accompanied by occasional resonant pizzicati. These elements alternate and then make way for a much more aggressive central section, Con moto, which seems like a wild, stamping dance. When the music of the opening section returns it is floridly elaborated and much transformed, with more than a hint of gypsy-style virtuosity, the rapid figurations suggesting a cimbalom. The coda is bleak and haunting, the passion spent, the final downward glissando a distant wail of despair.

But in the finale, Allegro molto vivace, we are plunged into a kind of folk-dance medley, though of the most sublimely transfigured kind. The cello becomes at one moment a kind of bagpipe, simultaneously drone and chanter, at another a zither or even a folk clarinet. Despite the virtuoso nature of the first two movements this tumultuous finale surpasses them in sheer bravura, with brilliant use of pizzicati, double stops, rapid repeated notes and tremendous arpeggio passages. The many themes, each it seems conceived from the inside of the instrument, refer to several different kinds of Hungarian folk music. An extended, eerie build-up, in spectral and eventually shrieking sul ponticello tremolandi, leads back to the movement’s opening theme and a magnificent review of most of its material even more staggering in its demands on the player’s technique. The defiant final bars span a whole five octaves, from the highest to the lowest B. Had he written nothing else apart from this magnificent Sonata, Kodály would still deserve to be accounted one of the greatest musical geniuses that Hungary has ever produced.

Previous to the Solo Cello Sonata, Kodály had composed his Sonata for Cello and Piano Op 4 in 1909–10. Though this was originally a work in three movements, he was dissatisfied with the first of them and allowed the Sonata to be performed, as it has been to this day, as a two-movement diptych. In 1922, when it was to be published, he made a new attempt to compose a first movement, but again was unhappy with the result this time because he felt his idiom had developed too far in fresh directions and decided not to combine the new movement with the two existing ones. The Sonatina for cello and piano, published in 1969 in an edition by the cellist and musicologist Lev Ginzburg (1907–1981), is believed to be the movement he wrote in 1922.

Beginning with an impressionistic piano solo before the cello’s first entrance, the work is highly lyrical, showing some clear influence from Debussy’s Cello Sonata of 1915, but its melodic invention is redolent from first bar to last of Hungarian folk inspiration. The title ‘Sonatina’ refers to its curtailed sonata-form design, without a formal development section but rather with a much-transformed reprise of the opening material forming the second part of the structure. This begins with the piano’s initial theme in the cello, and rises to a passionate climax. The invention is fluid, and sometimes capriciously improvisatory, the piano providing a remarkable range of accompanying patterns when it is not the principal focus of attention. The coda eventually arrives at a kind of melancholic serenity.

As for the remaining pieces on this CD, the Romance lyrique is a very early work indeed, composed in 1898 by the teenage Kodály while he was still living in the village of Nagyszombat (now Trnava in Slovakia), where his father was stationmaster. Immature it may possibly be, and not wholly free of a hint of the salon, but it has a heart-easing main tune and a wonderful ardent lyricism in the spirit of Brahms, Dohnányi and Dvorák (whose Cello Concerto it seems to quote at the end of its central section).

While Kodály kept the Romance lyrique in his drawer after he went to study in Budapest Conservatoire, the Adagio for cello and piano was one of the first chamber works he officially acknowledged. It was originally composed in 1905 for violin and piano; he made the version for cello and piano in 1910 (there is also one for viola). The work is dedicated to the violinist Imre Waldbauer of the Waldbauer-Kerpely Quartet. Here Kodály still appears in post-Brahmsian guise. The piece is in a broadly ternary form, the slow romantic outer sections framing a slightly quicker and more overtly Hungarian-style central section. The third portion, in which the main melody reappears in higher registers against a modified background, subsides to a peaceful conclusion, though not before giving vent to a passionate outcry.

The nine Epigrams (Epigrammák) were composed in 1954 along with several other educational works designed to exemplify Kodály’s method of musical education. They were originally conceived as vocalises, for a wordless voice and piano accompaniment, but the voice part can be adapted to almost any instrument. In these little pieces, grave, gay or lyrical, with their discreet polyphonic imitations between melody and accompaniment, the Hungarian accent is so perfectly absorbed into Kodály’s habit of discourse that there is hardly a hint of the exotic about them: they simply testify to a rare serenity of spirit and delight in music-making.