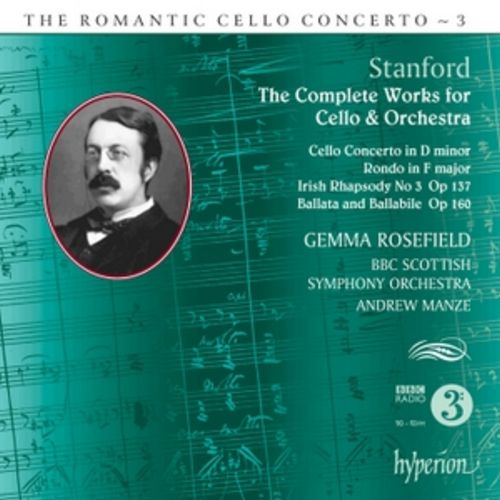 Cello Concerto in D minor
Rondo in F major for cello and orchestra
Ballata and Ballabile Op 160
Irish Rhapsody No 3 Op 137
Hyperion’s third disc in the Romantic Cello Concerto series sees the brilliant young cellist Gemma Rosefield making her label debut. She was the winner of the prestigious Pierre Fournier Award at Wigmore Hall in 2007 and has garnered great acclaim for her spirited playing.

Irish-born Charles Villiers Stanford is far better known for his choral music, but this disc of rarities reveals the composer’s original orchestral voice and his exceptional understanding of the relationship between soloist and orchestra. His Cello Concerto in D minor, with its continuous thematic development and lilting melodies, was a major landmark in the repertoire of British cello music and the overtly romantic Ballata and Ballabile displays an extraordinary lyricism.

Rosefield gives thoughtful performances throughout, her tone both beautifully consistent and richly hued, and the BBC Scottish Symphony Orchestra play with their usual aplomb. In these recordings it is difficult to understand why such well-proportioned and grateful writing for the solo cello has languished unplayed for so long.

Charles Villiers Stanford was born in Herbert Street, Dublin on 30 September 1852. His home was a stimulating and intellectual environment, encouraged by his mother (née Henn) from a distinguished Irish legal family, and his father, John James Stanford, a well-known lawyer. Stanford’s father was also a more than capable musician and was instrumental with others in founding the Royal Irish Academy of Music in 1848. Though Charles was never a pupil at the RIAM, he nevertheless knew many of its teachers, among them the German cellist Wilhelm Elsner. An energetic man and the father of a large musical family, Elsner had been one of the central figures at the RIAM since his arrival from the Continent in 1851. Every year he gave a benefit concert for himself and appeared in the regular series of ‘Monthly Popular Concerts’ with R M Levey (also of the RIAM), and, from time to time, Joseph Joachim, in programmes of chamber music. Like several Continental cellists of his generation, he played the cello without a spike and cultivated a refined tone and character reminiscent of the eighteenth century. He would often visit Germany for his annual holiday and it was during one journey on 15 July 1884 that he met his tragic death ‘on a dark, wet and stormy night’ when he disappeared overboard from the Kingstown (Dún Laoghaire) to Holyhead steamer, his body being washed ashore on the Isle of Man the following September.

Stanford wrote at least two works with Elsner in mind. A song, ‘O Domine Jesu’, was performed in Dublin on 23 September 1870 by the operatic soprano Thérese Tietjens with Elsner taking the obbligato part for cello. The other piece, an unpublished Rondo in F major for cello and orchestra (without opus number), dedicated to the German cellist, was completed on 17 August 1869. An accomplished work for a young man not quite seventeen, it is work that owes much to Weber, Mendelssohn and Schumann in its gentle lyricism and deft scoring. The simple structure, which begins with a slow introduction (a common feature of nineteenth-century bravura pieces in this vein), is also not without touches of real imagination. Stanford’s recomposition of the recurrences of the rondo theme has a nimble subtlety, and the use of cadenzas at the end of the central and (especially) last episodes injects a sense of quasi-operatic rhetoric to the otherwise pleasing procession of melody.

After leaving Dublin in 1870, Stanford entered Queens’ College, Cambridge as organ scholar where he also read Classics. Migrating to Trinity College in 1873, where he remained organist until 1892, he was given generous support by the Seniority (nowadays the College Council) of the college to study in Germany between July and December of 1874, 1875 and 1876, spending the first two periods in Leipzig under Karl Reinecke and the final one in Berlin with Friedrich Kiel, all the time being advised by his lifelong mentor, Joachim. After returning to Cambridge in January 1877, full of enthusiasm and creative energy (he was already the author of a symphony, a violin concerto, choral works and songs), he completed the Cello Sonata Op 9, written and dedicated to the cellist Robert Hausmann. Stanford probably first met Hausmann at the Lower Rhine Festival in 1873 at the same time as he met Brahms. A former pupil at the Berlin Musikhochschule, Hausmann studied with the Italian cellist Alfredo Piatti before embarking on a professional career in the early 1870s with the Graf-Hochberg Quartet. After joining the staff of the Berlin Musikhochschule he became a member of Joachim’s Quartet in 1878 and remained part of this ensemble until Joachim’s death in 1907 (though while the Quartet played in London, the position of cellist was taken by Piatti). Also, like Joachim, he was closely associated with the music of Brahms, whose Cello Sonata No 2 Op 99 was written for him, and he played in the premieres of the Double Concerto Op 102 and Clarinet Trio Op 114.

Hausmann made his debut in London on 30 April 1877 and, the following day, gave the first performance with Stanford of the Irishman’s Cello Sonata at one of Hermann Franke’s chamber concerts at the Royal Academy of Music. With Hausmann’s promotion of the Cello Sonata both in Britain and Europe the first significant British work in this genre Stanford decided to compose the Cello Concerto in D minor (also without opus number) for him which, barring Sullivan’s more lightweight concerto of 1866, was also a major landmark in the repertoire of British cello music. After completion in short score on 20 October 1879 it was shown to Hausmann for suggestions and improvements. It was then subsequently finished in full score while Stanford was on holiday in Caernarvon, Wales, in late August 1880. The work then appears to have remained unperformed except for the slow movement which Stanford and Hausmann played at a chamber concert for the Cambridge University Musical Society on 13 March 1884.

The first movement of the concerto essays a shared version of sonata form, a model essentially adopted by Mendelssohn where vestiges of the older classical ritornello procedure are also in evidence, notably in the orchestral tutti of the exposition after the solo opening, and in the central orchestral ritornello. Indeed, the opening crescendo which leads to the yearning cello theme is decidedly reminiscent of Mendelssohn’s Piano Concerto in G minor. The second subject is a highly lyrical affair which appropriately exploits the singing tone of the cello besides providing an emotional contrast to the more melancholy hue of the first subject. After the central orchestral tutti, Stanford breaks the mould by introducing, quite unconventionally, a new, tender thematic episode in D flat major during the development. Recovery from this radical tonal departure is, by necessity, more turbulent as D minor is restored for the recapitulation where all three thematic strands are restated.

The shorter slow movement in B flat major, marked Molto adagio, is essentially an ‘Intermezzo’ in song form (ABA), more in the tradition of Schumann. It features an extended, soulful melody which, at its close, is characterized by some remarkably original scoring for strummed pizzicato strings and sustained high flutes (an idea which was to surface again in the slow movement of his late unpublished Violin Concerto No 2 Op 162). A central paragraph, more passionate in gesture, is marked ‘quasi recitative’ for the soloist and is more operatic in its rhythmically freer delivery and tremolando accompaniment.

For the rondo-sonata finale, Stanford provides an interesting and unusual introduction which, besides furnishing a thematic anticipation of the principal rondo theme, effectively functions as a transition from B flat to D major. This tangential passage adds to the light-hearted nature of Stanford’s rondo theme and plays an important role in its eccentric recurrences throughout the movement. It is also preludial to a second subject of much more athletic passagework where we become aware of Hausmann’s virtuoso qualities. A second episode makes use of the main melody of the slow movement. This cyclic occurrence acts as a spur to further developmental treatment of the rondo material before Stanford embarks on a recapitulation featuring all three ideas.

By the time Stanford began composing his Irish Rhapsodies in 1902, he was at the height of his powers as a composer, conductor and teacher. The First Rhapsody Op 78, dedicated to Hans Richter, was hugely successful and remained a favourite of several conductors, including Hamilton Harty who directed it several times. Only this work and the more defiant Fourth Rhapsody Op 141 were published in full score, while the others were left in manuscript (excepting the Sixth Rhapsody Op 191 which was published in piano score only). The Irish Rhapsody No 3 Op 137 was one of two works in the series written for a soloist and orchestra. It was completed on 18 June 1913 but appears not to have been performed during Stanford’s lifetime. Moreover, most of Stanford’s works for soloist and orchestra were intended for a particular performer, but in this case there was none, neither does the manuscript bear any evidence of a dedicatee.

By 1913 much of Stanford’s expression of his Irish identity had adopted a more political mantle. A staunch Unionist and a follower of Craig and Carson, he opposed all thought of Home Rule for Ireland and vehemently supported Ulster’s cause. This is notably overt and deliberate in the Fourth ‘Ulster’ Rhapsody of 1914. By contrast, the Third Rhapsody, which features the cantabile tone of the solo cello, is a more reflective, restrained work, rather melancholy in demeanour. Structured in two parts, the first section, over twice the length of the second, is an introverted, yet deeply melodious, yearning threnody and is conceived very much as an extended ‘song’ in the way it develops the generous three-part phraseology of ‘The Fairy Queen’, a melody he most likely drew from Edward Bunting’s collection of Irish folk tunes of 1796 (and which was ascribed to Carolan, the early eighteenth-century Irish harper and composer). A livelier second section, analogous perhaps to the operatic ‘cavatina-cabaletta’ constructions Stanford knew so well from Italian opera, is a lively Irish jig based on the Munster tune ‘The Black Rogue’ (a double-jig which Stanford included in his edition of the Petrie Collection published between 1902 and 1905 with the title ‘Brigid of the fair hair’). Much of the jig is boisterous in character, yet a shorter, slower section returns nostalgically to the mood of the first section, even making brief reference to its melodic material, before the jig returns to form an energetic conclusion.

The autograph full score of the Ballata and Ballabile Op 160 is dated 5 January 1918 and was written at Windsor where, as as result of the German bombing of London, Stanford spent much of the war to calm his nerves. It was composed for the young British cellist Beatrice Harrison, who was to become famous for her first performances of Delius’s Cello Sonata (31 October 1918) and Double Concerto (with her sister violinist, May, in 1920). The Ballata, a sonorous movement in the minor which recalls the pensive, folk-like material of Schumann’s ‘Im Legendenton’, exploits the cello’s singing capacity to the full, especially in the warm, central diatonic theme. The jaunty, elegant waltz of the opening idea of the Ballabile in triple time provides a gentle, euphonious foil to the Ballata, but it is contrasted with a broader secondary theme which, in the orchestra, evolves into an overtly romantic idiom, much more reminiscent of the early twentieth century. Stanford’s beautifully conceived sonata structure also has a delicious, classical poise that is coloured by delicately controlled eccentricities of modulation and changes of metre. The work was first performed in an arrangement by the composer for cello and piano by Harrison and Hamilton Harty (soon to become conductor of the Hallé Orchestra) at Wigmore Hall in London on 3 May 1919. This version, like the original orchestral version, remained unpublished, and a first performance of the orchestral version had to wait until 8 August 1988 when it was recorded in a BBC Northern Ireland studio performance by Raphael Wallfisch with the Ulster Orchestra conducted by Lionel Friend. It was later broadcast by the BBC on Radio 3 on 26 January 1990.