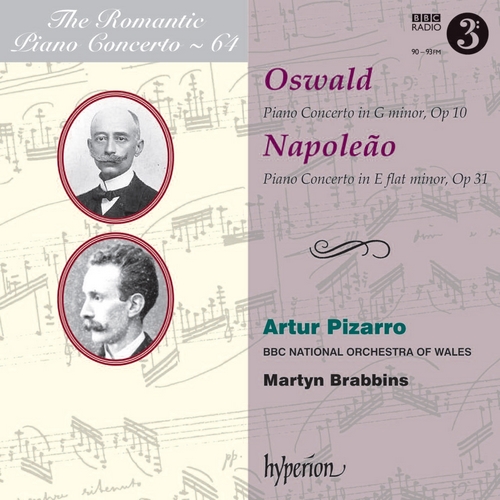 ALFREDO NAPOLEAO:
Piano Concerto No 2 in E flat minor Op 31 [36'59]
Portuguese virtuoso Artur Pizarro makes a welcome return to the Romantic Piano Concerto series with the outpourings of two brilliant pianist-composers. Their names may not be familiar to listeners today. The Brazilian Henrique Oswald and the Portuguese Alfredo Napoleao were born in the same year, less than three months apart, when Schumann, Brahms and Liszt were alive and Chopin recently deceased. Both were of mixed European heritage: Oswald with a Swiss-German father and Italian mother, Napoleao with an Italian father and Portuguese mother. Both were child prodigies who became widely travelled concert pianists, pedagogues and composers. In 1868 Oswald gave his ‘farewell recital’ and left Rio de Janeiro to study in Europe; Napoleao went to Brazil.

Oswald’s Piano Concerto in G minor, Op 10, dates from about 1886, the year he met Liszt. Although influences of Fauré can be detected in the second theme, the overall character of the first movement owes more to the late Romantic German style. The orchestration is rich and full, but the Tchaikovskian athleticism and virtuosity of the piano-writing keep the soloist to the fore.

Napoleao’s Piano Concerto No 2 in E flat minor, Op 31, is undated but was probably composed around the same time as Oswald’s Piano Concerto. Although Napoleao performed the concerto in a solo piano version, the first performance with orchestra had to wait until 12 February 1941. This was given by Evaristo de Campos Coelho (1903–1988) with whom Artur Pizarro, the pianist on the present recording, studied as a young child. He played the work numerous times, and performed it for Portuguese radio. Dinorah Leitao (who was Ivo Cruz’s daughter in law, and also a student of Campos Coelho) then played it, and Artur Pizarro is only the third pianist to champion this work.