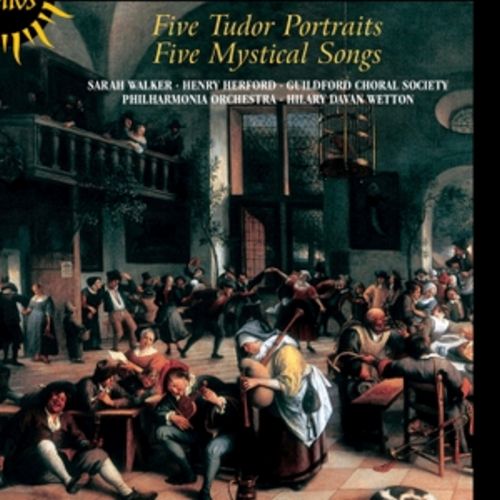 Vaughan Williams completed the Five Mystical Songs, together with the Sea Symphony, in 1911. He was by then almost forty years of age and had but a few years earlier (1908) studied with Maurice Ravel in Paris. Despite their disparate personalities the two musicians became firm friends and, although Vaughan Williams was later to make characteristically flippant remarks about catching ‘French fever’, in truth he learned much of value from the elegant Frenchman, a fact that he was only too ready to acknowledge. That he chose to study with a French master rather than follow the Teutonic studies favoured in his day shows a remarkable degree of discernment on the part of the evolving composer. He was rewarded with much good Gallic advice: to be ‘complex but not complicated’ apropos contrapuntal textures; he was taught to orchestrate in points of colour rather than in lines; also that formal development should be undertaken only to arrive at something better, never just for its own sake. Ravel was revealingly horrified to hear that Vaughan Williams had no access to a piano in the modest Paris hotel in which he stayed. Only with a piano, the French master explained, could one invent new harmonies. Such advice Vaughan Williams accepted with gratitude and he summed up his three months in Paris as a ‘new and invigorating experience’.

Two of the English composer’s most loved and enduring masterpieces, On Wenlock Edge and the Fantasia on a theme of Thomas Tallis, followed his sojourn in Paris, and it was in particular the success of the latter which earned Vaughan Williams a new commission to write a work for the Worcester Festival. To fulfil this request the composer decided to complete the settings of five poems by George Herbert upon which he had been working for some time. The poet was himself a musician who associated music with a ‘divine voice’, a view totally in sympathy with the visionary aspects of Vaughan Williams’s art. Herbert died from tuberculosis in 1633 at the age of forty, his early demise the more sad since some of his poems are among the finest of the early seventeenth century. They are to some degree reminiscent of those of his great contemporary John Donne, even if they are less vivid and more intimate, a factor which, together with their ‘musicality’, tends to make a successful musical setting more attainable.

The orchestration of the first two of the Mystical Songs owes something to the example of Elgar, and the opening song ‘Easter’ establishes the nature of the whole cycle, its ardent religiosity being combined with a wholly acceptable romantic inclination. The second song, ‘I got me flowers’, is a fine example of Vaughan Williams’s ability to express emotion with the simplest arrangement of notes, whilst the third, ‘Love bade me welcome’, has a muted string accompaniment that creates a perfect foil for the words. The use of the Corpus Christi chant, ‘O sacrum convivium’ as a wordless chorus set against the baritone soloist’s words ‘You must sit down … ’ is simply masterful.

‘The Call’, the fourth song in the set, uses a tune that might have come from the distant past but was in fact a typical invention of Vaughan Williams. Its modal treatment lends credence to its apparent antiquity and it provides a remarkable contrast to the ‘Antiphon’ that concludes the set. ‘Let all the world in every corner sing’ rings out with unequivocal conviction and, after its first performance, The Times reported that ‘the spirit of the words is reproduced with extraordinary sympathy, and the words themselves declaimed in a way which indicates a true musical descendant of Lawes and Purcell’.

The first performance of Vaughan Williams’s Five Tudor Portraits was given at the Norwich Festival in 1936. ‘I think they thought they’d get “O Praise the Lord”,’ the composer noted, ‘but I sent them the Five Tudor Portraits.’ It was clearly a shock to many since the poems set were by John Skelton, a Tudor poet whose vigorous realistic and earthy verses may be said to have caused consternation among certain members of the audience. Skelton, a one-time tutor to Henry VIII (when Duke of York), used what became known as a ‘Skeltonic line’, a short erratic rhyming verse which may descend from Medieval Latin rhyming prose. The ribald ‘Tunning of Elinor Rumming’ is an excellent example of this and such verses were well-known to Elgar who described the Skelton metre as often being pure jazz. The first performance of the Five Tudor Portraits under the baton of the composer earned wide praise from the critics of the day. Astra Desmond gave ‘the most delicate picture of a drunken hag at the famous brewing’, noted The Times; ‘everyone concerned caught the spirit of the thing, and the composer conducted a brilliant first performance’. Edwin Evans in The Musical Times reported that he had rarely seen an English audience ‘so relieved of concert-room inhibitions’.

Despite the enormous initial success of the Five Tudor Portraits, however, the work has not subsequently enjoyed the frequency of performance its musical merits may be said to have earned. The reason for this may well lie in the difficulty of the work, especially in respect of the characterization required, and also because the earthiness of the archaic humour contained in many of the verses is not universally appreciated. As the eminent writer Michael Kennedy has pointed out in his quite excellent The Works of Ralph Vaughan Williams, to some extent the design of the work may be to blame. Three fine short movements appear to be outweighed by the two long ones of which ‘Jane Scroop’ is so good that it tends to overshadow the whole work.

The uninhibited setting of ‘Elinor Rumming’ with which Vaughan Williams begins the suite shows the composer’s undoubted delight in the racy Skelton verses. Eventually, the varying rhythms are slowed to accommodate ‘drunken Alice’, whose revelations are tellingly accompanied by piccolo, trumpet and horn. ‘Pretty Bess’ follows, an Intermezzo of great charm in which the soloist’s protestations are echoed by the male chorus. It is also the male chorus that sings the ‘Epitaph on John Jayberd of Diss’ the eponymous subject of which Skelton had known and obviously disliked since he revels John Jayberd’s demise; Vaughan Williams echoes these sentiments in some brilliant choral writing. The section ends with a parody of the Office for the Dead.

The following Romanza is no parody but a real requiem for a pet sparrow killed by a cat. Tender innocence is marvellously portrayed in both verse and music in this lament by a lady for her lost pet. Little Jane and her friends carry the minute coffin to its interment, chanting words from the Requiem. The sensitivity of orchestral writing in this movement is one of Vaughan Williams’s most remarkable achievements. The air is full of the sound of birds and, at the climax, Jane’s voice can be heard intoning the Miserere. The chorus, in a glorious passage, sings of the approaching night and for Philip Sparrow’s soul. Here Vaughan Williams is truly inspired; avoiding sentimentality he unerringly evokes an emotional response of genuine depth.

To be successful the final song could only be a complete contrast to ‘Jane Scroop’, and so it is. ‘Jolly Rutterkin’ is a delightful Scherzo that uses cross-rhythms in an exciting and masterly fashion. It brings a fine work to an eminently satisfying conclusion.

Nearly thirty years after his time in Paris with Ravel was not Vaughan Williams still reaping the benefit of his studies there? There are many pointers to that conclusion in the Five Tudor Portraits.