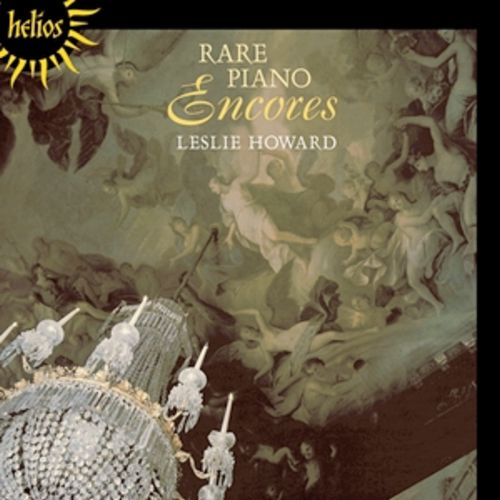 Moszkowski:
Chanson Boheme de l'Opéra Carmen de Georges Bizet
i inni
This fascinating recital takes us on a tour of some of the less-frequented byways of the piano world, and into a repertoire all too often missing from our concert halls as modern performers and promoters eschew the ‘frivolity’ of such works. Yet these are the very pieces which were the meat and drink of the grand masters of previous centuries. Whereas a pianist such as Rachmaninov would construct a programme like a well-planned banquet, with concern for balance, variety, size and general digestibility, most modern programmes are awesome by comparison and, though shorter than the old-style recital, often seem longer. Greeted by the BBC on its original release a quarter of a century ago as ‘a delightful collection, beautifully played’, for this reissue of Rare Piano Encores Leslie Howard has taken advantage of the greater playing time of a CD – the original was of course on vinyl – to add two of his own compositions by way of a bonus and with thanks to kind listeners. Yuletide Pastoral was composed in response to a commission from Gramophone magazine for its Christmas number in 1997, whereas Réminiscences de l’opéra ‘La Wally’ de Catalani, firmly in the spirit of Liszt, is an old-fashioned operatic fantasy, based for the most part upon the famous aria Ebben’ ne andro lontano – a melody recently made even more popular by its essential part in the plot of the magnificent film Diva.

'Wreathed in laurels for his marathon cycle of Liszt's complete piano works, the Australian born, London based pianist Leslie Howard has come up with a typically bright idea to showcase his digital dexterity' (The Observer)