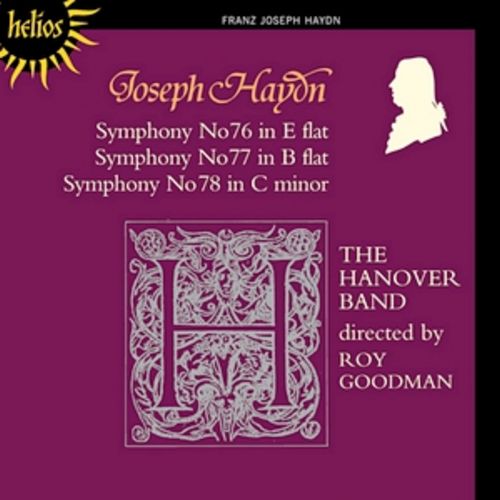 By the early 1780s Haydn had been in the employ of Prince Nikolaus Esterházy for some twenty years. Yet, although his duties kept him at court for much of the year, his music and his reputation had already reached right across Europe, as far as Spain and England. Since there were no copyright laws to speak of in those days, dissemination of music was often through the work of publishers who had no compunction in re-engraving pirated versions of orchestral parts (the usual form of publication) if they could lay their hands on manuscript versions by disreputable copyists. Haydn, though obviously averse to publications of his music that gave him no financial reward, was astute enough a businessman often to have his works brought out by more than one publisher. Such was the case with Symphonies 76, 77 and 78, issued in the early 1780s by no fewer than three companies: Torricella in Vienna, Boyer in Paris and Forster in London. (Mozart tried a similar ploy by selling a manuscript to one publisher and then writing the music out again from memory to sell to another.)

These three symphonies, not only the first since numbers 6, 7 and 8 to be written as a set (a publishing rather than a performing practice) were also the first Haydn wrote expressly for performance outside the confines of Eszterháza. They were intended for a concert tour to London, a trip that Haydn never made (he had to wait until the prince’s death in 1790 for the impresario Johann Peter Salomon finally to lure him to London). In 1781 (the year he began his association with the publisher William Forster) Haydn appears to have been invited to introduce in person some of his operas and symphonies to the London musical public. His Symphony No 53 had been performed with great success at one of the Bach-Abel concerts (run by the ‘London Bach’, Johann Christian and Karl Friedrich Abel, both of whom had taught Mozart on his visit to London in 1764) and The Morning Herald reported in November 1781 that Haydn ‘the Shakespeare of musical composition is hourly expected.’† He had still not arrived by February 1783 when the Herald again bemoaned that ‘we have got neither him nor his music however the music is certainly to come the musician, most probably, will remain in Vienna’. The English music historian Dr Charles Burney also wrote in a letter at about the same time,

I have stimulated a wish to get Haydn over as opera composer but mum mum yet a correspondence is opened, and there is a great likelihood of it, if these cabals, and litigations ruin not the opera entirely …

Two years later, when the composer was still anxiously awaited, it was even lightheartedly mooted that he might be kidnapped, as the following, from another journal, the Gazetteer and New Daily Advertiser, suggests:

This wonderful man, who is the Shakespeare of music, and the triumph ot the age in which we live, is doomed to reside in the court of a miserable German Prince, who is at once incapable of rewarding him, and unworthy of the honour … would it not be an achievement equal to a pilgrimage, for some aspiring youths to rescue him from his fortune and transplant him to Great Britain, the country for which his music seems to be made?

In his letter offering the three symphonies to Boyer in Paris, Haydn describes them as ‘beautiful, elegant and by no means over-lengthy … they are all very easy, and without too much concertante’. They do indeed stand out from the surrounding Eszterháza works, lacking some of the idiosyncracies that, although suitable for his own performances at the court, might have deterred foreign performers. That is not to say, however, that they lack anything in originality or quality.

Symphony No 76, like the other two, has the standard four movements and, unlike many of his other symphonies, no slow introduction to the first. Here we are launched straight into the first subject, an alternation of vigorously arpeggiated chords and a restrained, downward-moving phrase. There is no second subject as such, unless we include the brief pianissimo phrase (in the tonic key) that follows the second appearance of the falling idea. The Adagio begins with the strings alone, making the entrance of the wind on a pianissimo chord all the more effective; they return at the climax of the movement, a fortissimo tour de force of demisemiquavers and staccato semiquavers. The Minuet is followed by a lighthearted Rondo, featuring some brief woodwind solos before the final coda.

The most notable thing about Symphony No 77 is its finale, one of the first examples of a sonata-rondo form, literally a combination of sonata form with the rondo in which the C section of the A–B–A–C–A comprises a development of earlier material rather than a new theme. The preceding movements are no less distinctive: an opening Vivace with, this time, a true second subject; a leisurely, often restrained Andante sostenuto with the strings muted; and a Minuet of a vigour that looks forward to the true scherzo.

The first movement of Symphony No 78 has an urgency in keeping with its key, C minor. The second subject turns to the relative major, E flat, and it this key rather than the tonic that ultimately dominates the exposition. The development features some fine contrapuntal writing where fragments of both subjects are tossed between the various instruments. The Adagio returns to E flat major. Unlike the slow movements of the other two symphonies, the wind instruments are integrated lnto the texture from the start, while the stateliness of the music itself looks forward to the late ‘London’ symphonies. The C major Minuet is followed by a Presto rondo whose thinly scored B section turns to C major. When the same theme reappears later, so does the major mode, which remains to the end of the symphony.