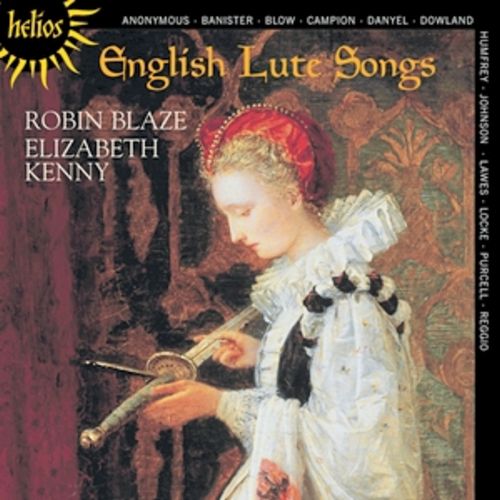 English Lute Songs covers a variety of styles by composers such as Blow, Dowland, Campion, Lawes and Purcell; some for voice and lute and some for lute alone. It is a disc which aims to look beyond the standard repertoire for countertenor and lute and hopefully introduce listeners to some lesser known pieces which will delight and enthrall.

Robin Blaze and Liz Kenny have performed these works together on the concert platform to great acclaim.

'Robin Blaze has the special ingredients to transcend any latent prejudice [of countertenors], especially in a recital as wide-ranging and intelligently programmed as this. Blaze has the means to colour his texts, not just with superior diction, but timbral variation to keep the listener hearing each song afresh ...There are too many highlights to list ... superb. Another fine achievement from two of Britain's brightest and best.' (Gramophone)

'Can be recommended without reservation … the wonderful 'By beauteous softness’, from Queen Mary’s Birthday Ode of 1689, given this performance, I could quite easily listen to for ever … There’s a remarkable technical ease and innate literary intelligence about Blaze’s singing which together with the astounding beauty of his voice makes this one of the most outstanding recitals of its kind on disc' (BBC Music Magazine)

'Wonderfully performed … Among the new generation of countertenors, Robin Blaze is the genuine article. Blaze [has] poised intensity, unswerving intelligence and sensitivity to the sheer, melting beauty of his instrument' (BBC Music Magazine)