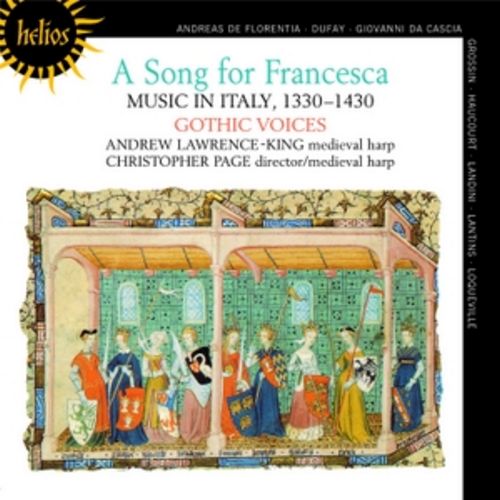 Italy possessed a thriving and distinctive musical culture during the fourteenth century. By the early 1400s, however, Italian listeners had become deeply interested in the music of French and northern European composers. This recording explores the contrast between the two repertories the native Italian and the borrowed French.

Tracks 1 to 9 reveal the vigour and independence of the Italian tradition in the century of Petrarch and Boccaccio. Our title is taken from the monophonic ballata Amor mi fa cantar a la Francesca (track 6), meaning ‘Love makes me sing to Francesca’ but also ‘Love makes me sing in the French style’. This beguiling piece may represent the kind of music which the well born young men and women of Boccaccio’s Decameron sang and played in their Tuscan villas during the time of plague in 1348. It is preserved in the Vatican manuscript Rossi 215, a source which derives from the musical circle around Alberto della Scala in Padua during the 1330s and 1340s, and after 1337 in Verona. This manuscript is also the earliest extant collection of Italian secular polyphony. Among its polyphonic items is Quando i oselli canta (3), a piece which shows important aspects of trecento polyphonic style in their pristine state. It is a madrígal, a distinctively Italian form (not to be confused with its Renaissance counterpart) which usually comprises two or three stanzas of three lines each (terzetti) followed by a ritornello. In conventional practice the music for each of the terzetti was identical, while the ritornello had its own music. All of these formal features are displayed by Quando i oselli canta and, like the great majority of trecento madrigals and ballate (but in sharp contrast to the greater part of the fourteenth-century French repertory), Quando i oselli canta is a two-part composition. The upper voice has a florid and mildly virtuosic character, while the lower one moves in longer note values, displaying a deliberate rhythmic plainness and a preference for stepwise motion. At times, the contrast between the two parts is very marked indeed, and we begin to understand why the Paduan theorist Antonio da Tempo (Trattato delle rime volgari, 1332) regarded ‘rustic sections’ (partes rusticales) as a characteristic trait of the madrígal; there is undeniably something of the bagpipe in the pedal-point effect where the composer sets the words ‘La pasturele’ in the first terzetto of Quando i oselli canta. It is quite possible indeed that the two-part style of the trecento began as a form of improvized homophonic singing whose origins may well be popular and vocal/instrumental. The ritornello of Quando i oselli canta, for example, is little more than a series of parallel fifths with a few passing notes here and there and the occasional octave added to mark key structural points in the music.

This two-part style, found in so much Italian music of the trecento, has often been described as one in which the lower voice ‘accompanies’ the upper, but in practice the artistic relationship of the parts is more complex. Once again Quando i oselli canta is a telling piece, for its lower part has the melodic form ABA (not counting the ritornello). The upper part does not share this melodic shape, however, and might therefore be described as a decoration of the ‘tune’ in the lower voice. Throughout the trecento repertory, indeed, there is a danger that we will direct our attention to the wrong part. Even in a florid piece like Quando la stella (5), a madrígal by Giovanni da Cascia (Johannes de Florentia), we should perhaps be focusing our attention upon the text as it is plainly and boldly declaimed by the melody in the lower part.

To illustrate the later phases of northern Italian polyphony we have drawn upon the instrumental music of the Franco–Italian repertoire contained in the Faenza codex (4 and 7), and upon the ballate of two Florentine composers: the celebrated Francesco Landini (8 and 9) and his remarkable but little-known colleague Andreas de Florentia (1 and 2). (Johannes Ciconia, whose music would readily find a place in the scheme here, deserves a recording project to himself.) The items presented here are all polyphonic ballate in accordance with the growing importance of that genre from the 1360s onwards. As with most medieval forms of vernacular lyric poetry set to polyphonic music, the ballata is obedient to two fundamental principles of organization: first, the musical form is created by arranging two music units in a pattern of repetition and variation; and secondly, a section of text is never sung and then immediately repeated. The musical scheme of the ballata as it appears in the works recorded here may be represented as: A (ripresa)–bb (two piedi)–a (volta)–A (ripresa).

Andreas de Florentia entered the order of the Servi di Maria in Florence in 1375 and was an organist like Landini. His ballata Per la ver’onesta (2) displays a mature two-voice style in which the parts are more homogeneous in character than in earlier pieces such as Quando la stella. Per la ver’onesta is a fluent dialogue in which the voices are united by passages of imitation and by the exchange of motifs. Something similar may be said for Landini’s Ochi dolenti mie (8) where scarcely a note is wasted.

The selection of pieces (track 10 onwards) from the Italian, and possibly Venetian, manuscript Canonici misc. 213 begins with a Latin motet to the Virgin, undoubtedly the work of a composer from northern Europe. Its five-part texture is quite exceptional for this date (probably the 1420s); only in the English Old Hall manuscript, or in the motets of Dufay, do we find other examples. It is isorhythmic in all five parts and remarkably consonant. Could this beautiful and anonymous piece be the work of the greatest composer of the period, Guillaume Dufay?

All of the remaining compositions are cast in the dominant song-form of the fifteenth century, the rondeau. All but one of them are three-part pieces created by a cantus tenor duet that is given extra harmonic colour and rhythmic impetus by a contratenor. The range of styles is considerable. Plaindre m’estuet (14) by Hugo de Lantins (a setting of a poem with a shameless acrostic) has several extended passages of imitation, principally between the cantus and tenor, which can be pointed in performance (as they are here) by appropriate texting; all three parts of the song are texted in the manuscript. The harmonic style is rich and sonorous with many full triads. The anonymous Confort d’amours (16), a four-part piece, displays a rhythmic style often found in Canonici misc. 213; the mensuration corresponds to a modern 6/8 and the rhythms in the upper parts alternate nervously between crotchet–quaver and quaver–crotchet patterns in such a way (and this is a key point of the style) that they rarely synchronize; insistent hemiola patterns (where the 6/8 bar is filled by three crotchets) also vary the rhythm. As a result there is movement on virtually every beat of the 6/8 measure throughout the piece and the impression is one of restless motion. Special points of interest in this piece (and we have been unable to find another one quite like it) are the wide compass (seventeen notes in all) and the composer’s mild experiments in chromaticism.

All of the composers of these items were northerners. Richard Loqueville became master of the choristers at Cambrai Cathedral in 1413; he played the harp, and several of his chansons are performed here on a reproduction of the kind of instrument that he would have used. These gracious songs, whose economy of means makes such a striking contrast with the earlier Italian pieces, are perfectly idiomatic for the sound and articulation of the harp. Of Hugo de Lantins little is known except that he flourished from around 1420 to 1430 and may, like Loqueville, have had connections with Guillaume Dufay. And of Dufay, the flower of all musicians in his century, what can be said that has not been said already? His Quel fronte signorille in paradiso (11) is a perfect example of Italian sweetness a la Francesca.