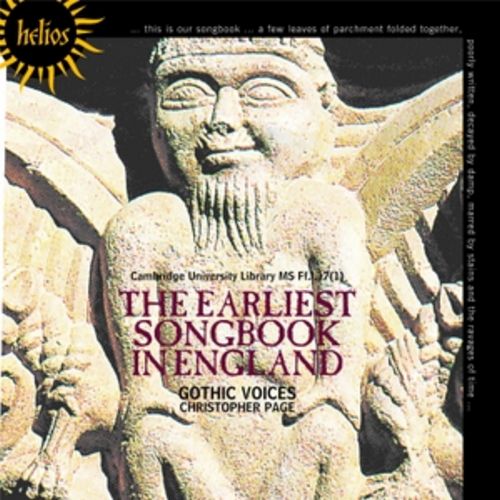 Probably copied around 1200, this songbook was discarded within a generation or so and used as flyleaves for another book. It was poorly written, decayed and damp, marred by stains and the ravages of time, but because the pages were being used for another purpose, some unknown benefactor preserved this wealth of music and poetry. The songbook then remained hidden for some six hundred years.

This recording is an almost complete anthology of songs from the booklet. It isn’t known where it was copied, but it is believed to be an important religious foundation that housed by chance a few unusually keen singers. Many of the pieces are associated with major feasts of the liturgical year, including some which fall in the intensely festive period between Christmas and New Year’s Day. The tone of many of the texts is therefore joyful.

‘Gothic Voices at their best … an astonishing and varied collection’ (Gramophone)

‘Helps us to understand how far advanced the music of the 13th century had become, while still appreciating its own brand of beauty. Gothic Voices

has the skill to bring it all to life, as they do everything they touch. This is a permanent addition to any good medieval collection’ (Fanfare, USA)

‘A winner. A magical evocation of a lost English 12th-century world’ (Classic CD)

‘Another happy triumph for Christopher Page and his team. As usual with Gothic Voices the singing is seamless and utterly beyond criticism.