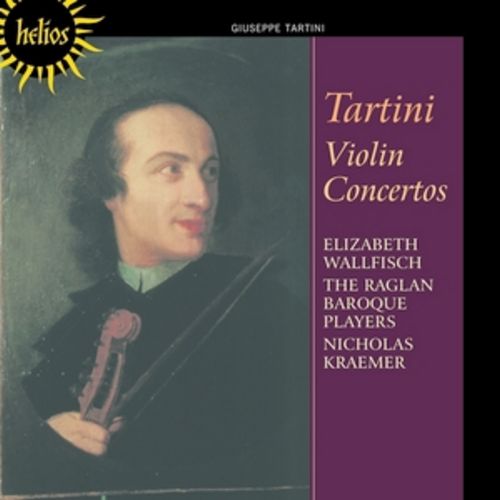 Concerto in B flat major No 12 in Sei concerti a 5 del … Tartini a G[asparo] Visconti, Op 1 libro 3
Concerto in G minor Op 1 libro 1 No 1, D85
Concerto in C major from the manuscript collection of eighteenth-century Italian instrumental music at the University of California, Berkeley
Concerto in F major Op 1 libro 1 No 5
Concerto in D major Op 1 libro 1 No 4
Tartini lived a long life for his time yet his name has been etched on the history of music for just one single piece, the so-called “Devil’s Trill” sonata (recorded by Elizabeth Wallfisch on Hyperion CDA66430). This enterprising new recording should go a long way to revealing the richness of the vast body of his music that has remained perhaps overshadowed by his reputation as a ‘one-piece composer’. This is violin music that even its protagonists are happy to have described as real “fiddle” music, music that understands and indeed stretches the instrument from an inside-out knowledge of the instrument. These concertos are fabulous vehicles both of violin virtuosity and of baroque sensibility at its most energetic and fetching.

Elizabeth Wallfisch has earned a world-wide reputation for her panache and perfection in this repertoire and as can be seen from her discography on Hyperion, these concertos add to an impressive survey of the music that lies at the heart of the golden era of this golden instrument.

'In every way this disc is superior to any Tartini recording I've ever heard: the soloist is in breathtaking form … in the quiet repose sometimes offered by the slow movements she and her wonderful continuo team are as eloquent as can be. One of my favourite discs this month' (Early Music Review)
dawniej CDA 67345 / Recording details: May 2002; St Jude-on-the-Hill, Hampstead Garden Suburb, London, United Kingdom; Produced by Martin Compton; Engineered by Julian Millard; Release date: February 2010;