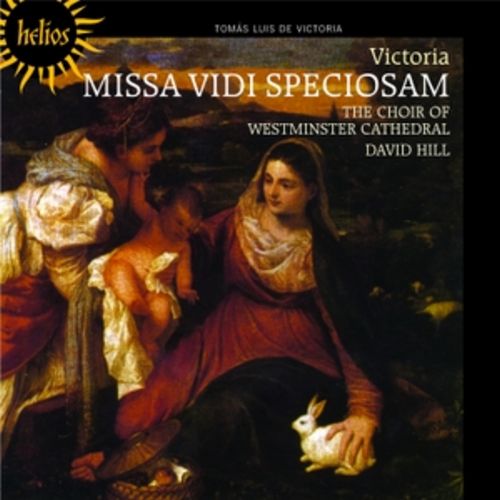 Almost all Victoria’s surviving works were printed in his lifetime; many of his motets were reprinted as many as six times. Of the few works that survive only in manuscript some were wrongly attributed to him by Pedrell at the beginning of the twentieth century. The four-part Ave Maria, perhaps rightly, continues to be accepted as Victoria’s, though it has to be noted that Pedrell first printed it in 1913 and its source remains obscure.

Victoria set the Hymn Ave maris stella twice and published one version in 1581 and the other (recorded here) in 1600. Alternate verses are sung to plainsong (in one of the many variants of this memorable tune) and the polyphony paraphrases and elaborates it. Ave maris stella is the Hymn at First Vespers on Feasts of the Blessed Virgin.

The remaining three motets on this recording are also Marian. They were all published in 1572 and reprinted several times in subsequent years. Ne timeas, Maria is an antiphon at Second Vespers of the Annunciation to the Blessed Virgin Mary. Sancta Maria, succurre miseris is a prayer for mercy and help for the people, the clergy and for women. It is the Magnificat antiphon at First Vespers for Marian Feasts.

Victoria’s highly expressive vocal lines do not have the expansive arching melodies of Palestrina; Victoria is more concentrated and strongly characterized. He has his musical fingerprints all over these pieces, notably in his use of cross relations, the close juxtaposition of sharp and natural, the close proximity of, say, F sharp and B flat, or even the melodic leap of that interval, all things that Palestrina would never allow. Another Victoria trademark is to form a full close with an authentic cadence, let one or more voices hold a pedal and then finish with a drawn-out plagal cadence. This favourite device and his liking for clearly cadenced subsections are typical of Victoria’s harmonically governed counterpoint.

Vidi speciosam is one of those liturgical texts that derives from the Canticum Canticorum (the Song of Songs) with all its imagery of love turned to the veneration of the Blessed Virgin Mary. Indeed Vidi speciosam is a Responsory at Matins on the Feast of the Assumption (15th August). It is set by Victoria in two sections in the form AB–CB. Victoria’s motet is for six voices (SSATTB) in the mixolydian (G) mode, which is frequently straight G major in Victoria’s hands. (This work and the Mass based upon it are performed in this recording one tone lower than the apparent written pitch.) The Virgin ascending into heaven is likened to the beautiful one rising like a dove over the rivers, like a lily of the valley or the rose in spring and so on. The perfumed language of the Hebrew love poems is taken over from the Latin Vulgate Bible into the Catholic liturgy and thence into music by the composer.

Victoria opens his motet with the three high voices followed by the three lower, and then he varies his vocal scoring with a wide variety of combinations mainly of three, four or six voices, often producing momentary double-choir effects. The frequent crossing of the tenor parts and especially of the two treble lines gives a bright shimmering quality to the music (Palestrina’s motet Assumpta est Maria has just the same vocal combination). Vidi speciosam appeared not only in the 1572 book but in 1576 (part 1 only), in 1583, 1585, 1589 (twice) and 1603. It was also copied into Cappella Sistina Codex 29.

In 1592 Victoria published his Missae … liber secundus and in it is a Mass based on Vidi speciosam. Like its model this Mass is for six-part choir (SSATTB); it is particularly concise, at times declamatory and homophonic especially in the Gloria and Credo. Victoria begins his Kyrie with the first phrase of the music of the motet with hardly any variation except that he reverses the appearance of the vocal groups, TTB being followed by the SSA group. The Christe for SSAT only is a reworking of the motet’s music at ‘circumdabant eam’. The second Kyrie is based on the motet section ‘Et sicut dies verni’.

The Gloria is a mixture of free homophonic writing mixed with derivations from the first half of the motet until at ‘Qui tollis peccata mundi’ Victoria uses the motet’s second half opening ‘Quae est ista’. Near the Gloria’s end triple time is introduced for ‘Quoniam tu solus Sanctus. Tu solus Dominus’, balancing the similar triple time at ‘Domine Deus, Agnus Dei’ just before the ending of the first half. The Gloria ends with ‘in gloria Dei Patris. Amen’ to music based on the phrase ‘et lilia convallium’ in the motet.

The Credo is concisely written, traditionally so because of its wordiness. Like the Gloria it mixes short syllabic phrases with quotations and rewriting of motifs and sections of the motet model. At ‘Crucifixus’ there is a long passage for the high voices (SSAT) only. The rare repetition ‘Et iterum, et iterum’ is set to the motet’s music for ‘et lilia, et lilia’. Like the end of the Gloria, the Credo’s ‘Amen’ makes use of the flowing phrases of ‘convallium’.

The Sanctus begins with the Vidi speciosam opening music (SSA followed by TTB) and, as so often with Victoria, he breaks into triple time for ‘gloria tua. Hosanna in excelsis’. The Benedictus (SATT) has its own ‘Hosanna in excelsis’ for six voices to a rewriting of ‘Et sicut dies verni’.

Finally, there is just one Agnus Dei ending with ‘dona nobis pacem’, so in this performance two plainsong invocations are sung first, with the ending ‘miserere nobis’. Victoria’s setting is for seven-part choir (SSAATTB). The second alto follows the first soprano in a canon ad diapente, at the fifth below. The Agnus Dei makes only minimal use of the motet model. Despite the independence of the voices in this richly polyphonic ending, the treatment is very syllabic; one could hardly call the few flourishes melismata.

In this performance both the motet Vidi speciosam and the Mass are accompanied discreetly by the organ. The practice of using organ support was widely employed in the late Renaissance; indeed in Spain and its dominions a ‘continuo’ of organ, bajon (early bassoon) and even harp became standard in the late sixteenth century and throughout the seventeenth. In the chapel of the convent where Victoria worked from 1586 until his death in 1611 the statutes laid down that the organist and the bajonista should be present to accompany the singers at all those services where polyphony was sung. Of course many choirs, notably in Rome and in northern countries, sang polyphonic music unaccompanied. The existence of different traditions should serve as a warning to those who believe in one standardized ‘authenticity’ for modern performance.