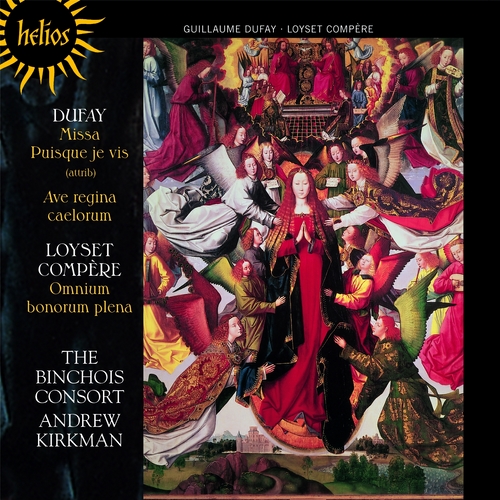 Anynomous:
Concede nobis, Domine
Salve maris stella
This recording contains the Missa Puisqueje vis, almost certainly by Dufay, and Compere’s Omnium bonorum plena written in praise of the Virgin Mary, as well as motets by Dufay and other sources, all of which help colour ourincreasing awareness of the ?orid richness and emotional devotion of music before Baroque, tillrecently the starting point of most people’s awareness of the art. Characteristics of Dufay are his intricate workmanship and the development of independent balance among the vocal parts that lead us naturally to the satisfying clarity which has itself given old music a strangely contemporary feel.

The Binchois Consort, undertheirfounderAndrew Kirkman, has a special affinity with the music of Dufay, forit was to perform Dufay that the ensemble was initially founded. That ?rst outing formed the basis of their continuing awardwinning exploration on Hyperion of 15th-century music, in particularthe worlds of French and English music during the so-called Burgundian period.

‘There is no denying the beauty of the performances here. Kirkman’s group …pourforth a golden stream of polyphonic textures captured in close and careful sound’ (AmericanRecord Guide)

‘As ever with this ensemble the singing is muscular and clean-cut, with Kirkman’s direction bringing out every detail’ (Early MusicReview)

‘Formed in 1995 The Binchois Consort have clocked up just six recordings, all devoted to the sophisticated world of ?fteenth-century sacred polyphony. Their efforts have won widespread critical acclaim and their small but ground-breaking discography is now beginning to look like one of the most valuable jewels in Hyperion’s already fairly glittery crown.In the hands of The Binchois Consort this extraordinarily personal and deeply internal music resonates down the centuries with immense power’ (InternationalRecordReview)

‘The singing is uniformly excellent, characterized not only by purity of tone and clarity of lines, but by the rich and complex colors produced by the combined voices’ (ClassicsToday.com)
Dawniej: CDA 67368