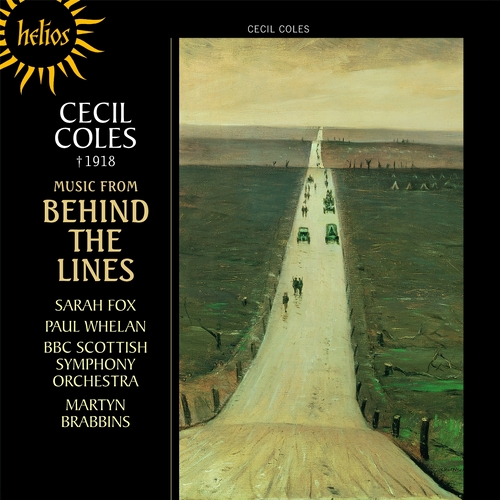 Coles: Music from Behind the lines

Overture 'The Comedy of Errors'
Fra Giacomo Alas Fra Giacomo too late! But follow me
Scherzo in A minor
Four Verlaine Songs
From the Scottish Highlands
Behind the lines
Born in Scotland in 1888, Cecil Coles studied composition at Edinburgh University, the London College of Music, and Morley College where he befriended Gustav Holst. He furthered his studies in Stuttgart, and was later appointed assistant conductor at the Stuttgart Royal Opera House. Forced to return to England before the outbreak of the First World War, he signed up for overseas service, and in 1915 was sent to the trenches in France. He continued to compose, including the particularly poignant work Behind the lines (dated on the manuscript ‘Feb 4th 1918, In the Field’). The first surviving movement provides a sketch of a northern French pastoral landscape, the second a heroic picture of a military funeral procession. Some two months later, aged just 29, the life of this extraordinarily gifted young musician was extinguished.

Coles was killed near the Somme on 26 April 1918 during a heroic attempt to rescue some wounded comrades. He was one of the most talented of the composers who lost their lives in the First World War, yet few remember him now. Thanks to the persistence and research of his daughter Penny Catherine Coles, his manuscripts, some still embedded with shrapnel, have been painstakingly pieced together helping to create this first commercial recording of these, indeed any of his compositions. In the words of the conductor, ‘this is a most exciting project, musically, socially and historically’.

Travelling on a journey somewhere between Mendelssohn and Bruckner or Richard Strauss via Brahms, the music is powerful, beautiful, and full of pathos and emotional intensity, performed here by the BBCSSO under Martyn Brabbins as expressively and passionately as it was composed.

‘A fascinating and rewarding discovery …performances, production and presentation are all past praise, and this is a disc already earmarked for my Critics’ Choice come the year’s end’ (Gramophone)

‘I listened to it this week, and was moved to something dangerously adjacent to tears …what you chie?y hear in Coles’s compositions is nobility, haunting beauty and a strange, almost prophetic sense of tragedy’ (The Times)

‘My reactions to the music, even after listening to the disc for some weeks, still oscillate between amazement, melancholy, and gratitude, although they are gradually melding into a fusion of all three. I don’t doubt that it will affect you too’ (Fanfare, USA)

‘Coles’s own orchestral skills are amply demonstrated by the lush, full-bodied playing of the BBC Scottish Symphony Orchestra’ (The Daily Telegraph)