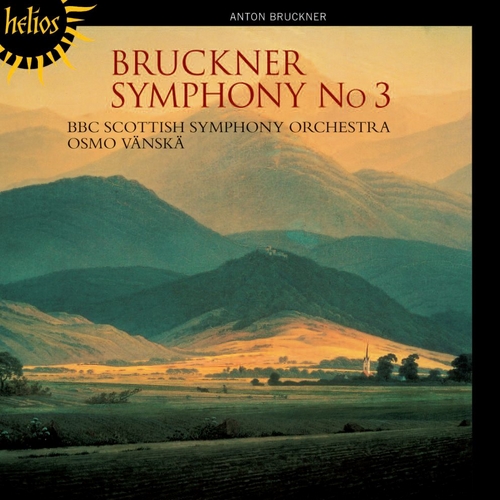 Symphony No 3
in D minor ‘Wagner Symphony’
Of all the Bruckner symphonies, No 3 is the most fraught with editorial ‘problems’. At least eight versions are known to exist: the original version of 1873 (not published until 1977); the first revision (1874, also unpublished); a ‘rhythmic revision’ (1876); a third revision, published in 1878 as the first edition (used for the premiere); a ‘Fritz Oeser’ edition of 1877; and two other versions from 1889, one edited by Nowak. This recording is of the 1877 third (first published) version, with the inclusion of an 1876 version of its Adagio containing much new material, which was discovered pasted over in the orchestral parts used in the first performance. Bruckner called No 3 his ‘Wagner Symphony’ and it contains many quotations from the Wagner operas including the famous cascading strings from the Tannhäuser Overture. ‘This is one of the best Bruckner-symphony recordings I have ever heard … a searing, electrically charged performance. Quite simply, it is stunning … one of the most exciting Bruckner performances on disc and certainly the best Third I have ever heard. This is one that you simply have to have.

Recommended with all the breath in my lungs … it has been a pleasure to review, and now to recommend’ (Fanfare, USA)

‘Superbly recorded … this is an account to recommend’ (International Record Review)

‘The BBCSSO play splendidly for Osmo Vänskä, whose feeling for this composer seems as profound as his much-acclaimed Sibelius’ (Classic FM Magazine)

‘An outstanding achievement all round’ (Amazon.co.uk)