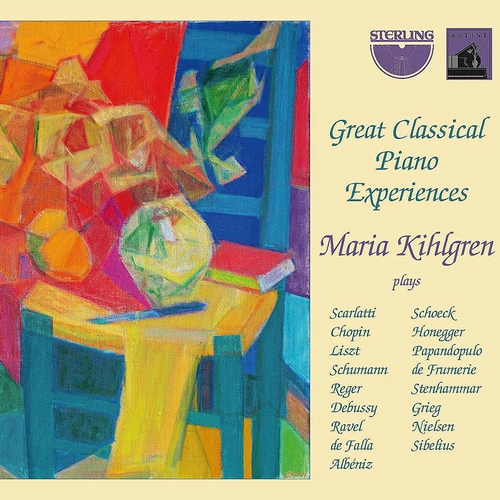 Schumann:
Abegg-variations, Op. 1
Fantasiestucke, Op. 12, Book 1
The pianist Maria Kihlgren studied at Göteborgs Musikhögskola and at the Hochschule für Musik und Darstellende Kunst in Vienna gaining her diploma in 1979. She has performed in Sweden and several European countries, the USA and South America. In recent years she has also devoted herself to recordings. Her CDs, with solo music for piano on the Sterling label, have been internationally acclaimed. All of them have a specific theme, with cover pictures by her father, the painter Carl Speglitz.
Recodings: Studio 3, Swedish Radio, 20-22 February 2008 (CD 1), 31 October-2 November 1990 (CD 3); Studio 2, Swedish Radio, March and April 2012 (CD 2), 29 September and 17-26 October 2019 (CD 4).