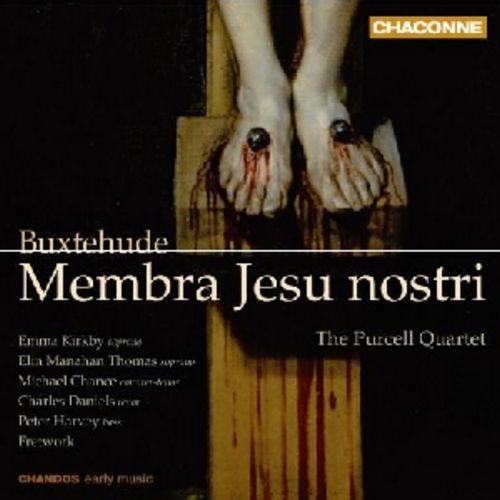 Weckmann:
Kommet her zu mir alle
This new release from Chandos’ early music label, Chaconne, focuses on Buxtehude’s seven cantatas, collectively known as Membra Jesu nostri. These are among Buxtehude’s best-known works, and perfectly exemplify the seventeenth-century preference for musical structures that are broadly symmetrical, but subtly varied in detail. Each of the seven cantatas has roughly the same shape: Biblical passages are set for the whole ensemble and enclose stanzas from the mediaeval poem Rhythmica oratio, which are set as arias for reduced vocal forces and interspersed with instrumental ritornelli.

Buxtehude’s Membra Jesu nostri takes the form of a sequence of seven meditations on the crucified body of Jesus, beginning with the feet (‘Ad pedes’), followed by the knees (‘Ad genua’), the hands (‘Ad manus’), the side (‘Ad latus’), the breast (‘Ad pectus’), the heart (‘Ad cor’), and the face (‘Ad faciem’). As such, the work is written from the perspective of a penitent kneeling at the foot of the cross and gradually extending his gaze upwards, meditating on each part of the body in turn. The keys chosen for the cantatas seem to have added symbolic meaning. As the gaze rises, they move from flats to sharps, from C minor to E minor, before finally returning to the opening key to produce a beautifully unified cycle.

On this release the cantata cycle is complemented by Matthias Weckmann’s Kommet her zu mir alle, a setting of the words from St Matthew’s Gospel (11: 28 – 30), in which the composer gives the words of Jesus to a virtuoso bass singer with an impressive range of nearly two octaves, a part here performed by Peter Harvey, and provides him with an accompaniment of two violins, three bass viols, and continuo.

The works on this disc are performed by an excellent ensemble of early music specialists. As exclusive artists, The Purcell Quartet is today popularising the cantatas of Buxtehude in concerts and recordings involving a fabulous quartet of soloists – Emma Kirkby,Michael Chance, Charles Daniels, and Peter Harvey – to which, for the occasion, the group is joined by the soprano Elin Monahan Thomas. The Quartet has also recorded a huge range of music exclusively for Chandos, including works by Purcell, Corelli, Lawes, Bach, Handel, Vivaldi, Weckmann, Buxtehude, Leclair, Schütz, Couperin, and Biber, to outstanding critical and public acclaim. The early music specialists Fretwork, the viol ensemble, also performs on this recording.